With the standard Mini One’s move to a new 1.5-litre three-cylinder engine, the new Mini has now totally transferred across to BMW’s modular engine range. The 1.5 is hardly brisk, taking 10.1sec to get to 62mph, but it’s fast enough in town to keep up with traffic, and impressively refined.

Next up is the Cooper, using the same 1.5-litre engine, but adding a turbocharger to the package, lifting power to 134bhp, while torque is up, to 162lb ft. The turbo is felt most in the mid-range, reducing the 0-62mph time to 7.9sec. For some of the evo office it's the most pleasant engine in the range to use, feeling more appropriate in its surroundings than the slightly pained-sounding 2-litre, though tall gearing blunts what could be an even more involving powertrain.

The sole diesel-powered Mini is the Cooper D, powered by a turbocharged 1.5-litre three-cylinder diesel engine. With 115bhp and a stout 199lb ft of torque, it manages the 0-62mph sprint in 9.9sec. 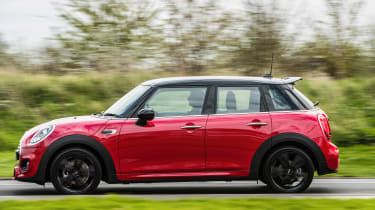 Quicker still is the Cooper S. With a manual transmission, the three-door version dashes to 62mph in 6.8sec and tops out at 146mph. The John Cooper Works is even quicker, covering the same metric in 6.3sec. Top speed for the Works is 153mph – more than enough for most, we suspect. It's just a shame neither model sounds particularly joyful in getting there. The engine is fairly smooth, but the artificial parp it emits isn't particularly sonorous and there's little encouragement to push it to the red line.

Adding a pair of doors inevitably dampens things a bit, but it’s marginal, the five-door One adding around 0.3sec to the 0-62mph time. The Coopers, whether petrol or diesel, add between 0.2- and 0.3sec to their sprint times, and the Cooper S a single tenth, but the reality is you’ll be hard pushed to notice on the road. The Coopers top out at 130mph, though all will manage over 100mph, with varying degrees of enthusiasm.