When the first BMW-engineered ‘R53’ Mini hatch was launched in 2001, its nostalgic styling and clever detailing might have made it a hit on the sales charts, but its superb handling characteristics proved that BMW hadn’t cut corners on its first ever front-wheel chassis.

The bespoke platform was a great one, with a low centre of gravity and square stance on the road complemented by the unusual application of multi-link rear suspension. As a result, the Mini had real talent on the road, with a snappy front end complemented by sure-footed handling that always seemed to grip no matter the circumstance. The next-generation Mini, revealed in 2007, was built on this same platform, improving ride quality and refinement along the way. Both, in short, felt like proper "Minis", even if they were significantly larger than the classics from which their name was derived.

Unfortunately, with BMW wanting to spread the development costs of the Mini’s front-wheel-drive platform, the third-generation F55 Mini moved over to a larger chassis shared with BMW’s 2-series Active Tourer and X1 crossover, changing not only the way the new model looked, but also softening its driving experience. It’s still very well sorted, and the Mini feels sophisticated underfoot like few, if any other superminis, but that pointed aggression has taken a step back over its predecessors. 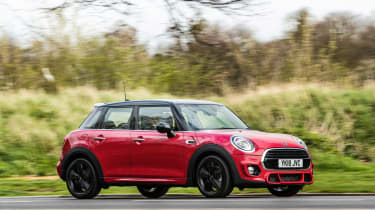 The flip-side of this new platform has been a big jump in refinement, something that probably appeals to most buyers, but it has taken away some of the Mini’s USP against more mainstream rivals.

The steering, although sharp, doesn’t communicate much information about the road surface, nor how much the front tyres have to give. The seating position, although lower than most rivals, is at least a few centimetres taller than before, making you feel yet more removed from the action in comparison to previous Minis. The ride quality is very well judged, though, and even over rough surfaces maintains composure, whilst never deteriorating to the point of discomfort. There is no doubt that the Mini holds on to its dynamic edge over its more pedestrian rivals, but the distinction between settled premium hatch and hot hatch seems to be thinner than ever.

Push further up the range, and the John Cooper Works models increase roll stiffness, but the sophisticated damping rarely feels out of step, even if overall ride quality becomes a little more compromised. Body control, as a result, is improved, while any sign of traction deterioration is made up for by the stickier tyre compound.

Don't ignore the non-Cooper Mini models. The Mini One is most definitely worth considering, not lacking in any sort of fun factor behind the wheel despite being down on power compared to the rest of the model range. The entire line-up of engines deliver fairly feisty performance and also offer a decent level of economy. You've got low running costs, thanks in part to excellent retained values and the option of Mini’s useful TLC servicing packs.

The five-door version loses little to its three-door relation on the road, while the extra practicality it brings is useful, but it’s still not quite as spacious or useful as some less glamorous mainstream supermini rivals. Plentiful option choices allow unrivalled personalisation, but watch those tick boxes; if you get carried away the price heads upwards alarmingly quickly - it's easy to spend a lot more on a Mini than intended.