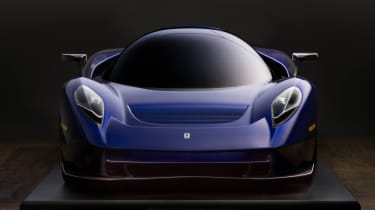 The new SCG (Scuderia Cameron Glickenhaus) 004 has been announced with a £300k price tag and is due in 2019. Along with a series of pictures of the car, a comprehensive spec-sheet has been revealed giving details of the engine and gearbox. . The small-volume manufacturer has also confirmed that race versions of the 004 will follow.

A twin-turbocharged 5-litre engine with a 8200rpm red line is mounted in the middle of the car. It produces 650bhp and 531lb ft of torque that’s sent to the rear-axle through a six-speed manual gearbox with a gated shift lever or steering wheel paddles.

The mid-engined supercar has been designed in the USA, where it will also be built. It uses carbonfibre extensively for the chassis and body, achieving a low kerbweight of just 1179kg. This yields a power-to-weight ratio of 560bhp/per tonne that puts the car on a par with the McLaren F1 - the iconic supercar that clearly inspired the SCG 004S’ interior layout.

The three abreast arrangement puts the two passengers either side of the driver as in the F1 but they’re right up alongside, unlike the F1 where they’re a little further back in the cabin. Elsewhere the instruments and controls are overwhelmingly analog with traditional dials and switches in place of modern touchscreen menus.

A test mule version of the SCG 004S is due to be built in 2018 with the firm aiming for deliveries in 2019. The production run will kick off with what SCG describes as the ‘Founders Edition’ models - 25 cars that will account for all production efforts up till 2019. Scuderia Cameron Glickenhaus has already taken down payments of $40k for the majority of the Founders Edition batch of cars and plans to ramp up production numbers when this batch is completed in 2019.

Joining the 004S will be the race-spec 004C, the suffix letters denoting the respective car’s purpose of ‘stradale’ (road) or ‘competizione’ (competition or track) use. The race-spec versions will be available built to a variety of discipline specifications, including GTE and GT Le Mans.

The 004S succeeds the 003S which retailed at $2m and SCG is hoping that the lower price will coax more buyers into the central seat of the 004. Competition in the supercar segment is rife at any price point, so the 004S will need to a complete offering free of compromise to lure buyers from the likes of the McLaren 720S and Ferrari 488 GTB. Both are more conventional choices, and cheaper too, offering similarly stratospheric performance.