Far more resolved from its frumpy predecessor, the Porsche has made good use of its new proportions 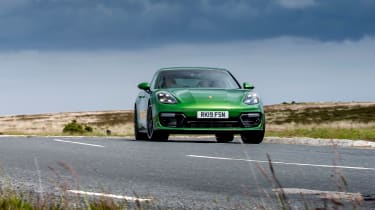 While the Panamera has always been popular, it hasn’t always been noted for its soundness of design. This second-generation model has a more agreeable look, not least because of its more pleasing proportions due to its MSB platform, shared at this stage with the Bentley Continental and Flying Spur. Like the interior, the second-generation Panamera also templated much of Porsche’s other models, with sleek, rounded surfaces and a full-width rear light bar.

A retractable rear wing features on all variants, but GTS and Turbo models upgrade this to a three-piece folding arrangement that is as entertaining to watch in the rear-view mirror as it is for people in the car behind. 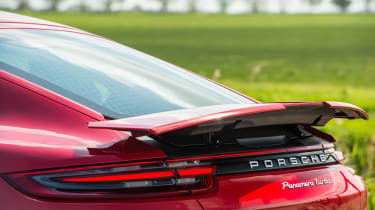 There are three basic styling variations available, with standard 4 and 4S models having a simple, understated look. Turbo models have larger front openings and the typical double-bar running lights, as well as a more assertive rear valance, but it’s the GTS with its standard Sport Design pack that has the most aggressive look with a combination of gloss black elements and tinted lights all around.

Sport Turismo models apply the same principles to a long, low estate-like body, although ironically boot space on paper is identical between the two. Turbo and GTS models also pick up a tiny active roof spoiler, making it look sort of like a demon Integrale with its little tail pointed straight up.