A fast, sophisticated and capable flagship that entertains when the road gets challenging, just choose your powertrain carefully

The entry-level Panamera 4 is fitted with a turbocharged 3-litre V6 that produces 325bhp from 5400 to 6400rpm. It also produces a torque peak of 332lb ft from 1340 to 4900rpm. This engine is also seen in A6, Q7 and Q8, pre-TDI S4 and S5 models and even the Volkswagen Touareg. Although not an inherently bad unit, far from it in fact, it remains the most humdrum engine in the range. Still, it’s propensity to rev, refined manners and fat torque curve make for a good pairing with the Panamera 4’s more laid-back demeanour.

Despite having a smaller capacity – just 2.9 litres – the V6 in both the 4S and 4 E-Hybrid produces more power and torque than in the basic Panamera. That’s because the 4S’s engine is newer and more sophisticated and features two turbochargers mounted within the banks of the two cylinders to create a hot-V engine, making for a peak power of 434bhp from 5650 to 6600rpm and 406lb ft of torque between 1750 and 5500rpm. In the 4 E-Hybrid the hot-V V6, when supplemented by a 100kW electric motor, makes an equivalent total of 456bhp and 516lb ft of torque. 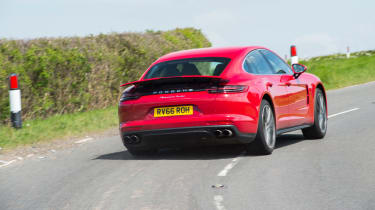 The Panamera GTS differs from typical Porsche GTS models by its use of a detuned version of the flagship Turbo engine rather than sharing a lesser S-model powertrain. This has been done to comply more easily with emissions regulations in a larger, yet less-stressed engine application, but it also gives us access to something rather wonderful. Without the neck-snapping acceleration of the Turbo, it gives you more time to enjoy the aural pleasures of its V8 engine without constantly breaking the national speed limit. The specific V8 in use is the usual 4-litre hot-V twin-turbo unit found across the Volkswagen group, but here pegged to 452bhp, with 457lb ft of torque available between 1800 and 4500rpm. Despite being close to 150bhp shy of the peak found in other applications of this engine, it remains an impressive unit.

The Turbo and Turbo S E-Hybrid share this same V8 engine, both packing considerably more power, as you’d expect. Turbo models are rated at 542bhp, with a fat 568lb ft of torque available all the way down at 2000rpm. The Turbo S E-Hybrid uses the same V8 rating as the Turbo, but bundles it with a 100kW electric motor to push those figures up to 671bhp and 627lb ft of torque.

Every Panamera, from the 4 to the Turbo S E-Hybrid, uses an eight-speed dual-clutch transmission that’s also fitted to the Bentley Continental GT. Changes are fast without being jerky, and in full-auto mode it can be a little clunky at low speeds, but it’s smooth when out of town or on a motorway.