Not the most fun, but well-rounded and good value too 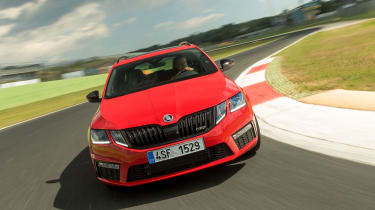 You have a choice of two engines (one of which is available in two power outputs), two transmissions and two methods of sending drive to the wheels in the Octavia vRS range. The simplest combination is petrol, manual, and front-wheel drive, which consists of the Volkswagen Group’s ubiquitous EA888 four-cylinder turbocharged 2-litre and a six-speed manual gearbox.

Opt for the other engine – a 2-litre turbodiesel – and you only get one power output, 181bhp. That figure is developed at 3500rpm and there’s a 280lb ft slug of torque from 1750rpm. It’s far from being too much for those wheels to handle, but the 2.0 TDI also comes with the option of four-wheel drive, paired exclusively with the DSG ‘box. The Haldex 4x4 system can send up to 50 per cent of the engine’s torque to the rear wheels. Lots of fun on a frozen lake, as we found out on the car’s launch, but the real benefit is extra traction on poor or slippery surfaces.

As well as a six-speed manual the regular petrol version and diesel engine cars can be bought with a six-speed dual-clutch transmission. But, the 245, because it has a chunk of extra torque, has VW’s newer seven-speed wet- and dual-clutch gearbox.