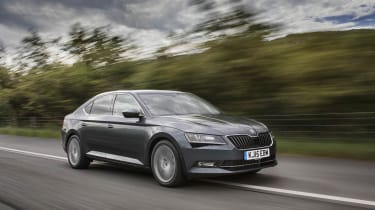 The presence of a 276bhp four-cylinder under the bonnet of the flagship Superb – an engine snagged from the Seat Leon Cupra 280 – means Skoda’s luxury hatch isn’t short on pace. 0-62mph takes 5.8sec (just a tenth down on the SEAT), while top speed is limited to 155mph. The engine is also 24 per cent more efficient than the most potent engine of the previous Superb – a 3.6-litre V6 - producing a claimed 165g/km of CO2 (the V6 produced 215g/km).

Step down to the 217bhp TSI and you don’t feel too short-changed. It’s equally smooth and near-silent most of the time, yet delivers enough punch for a 7-second 0-62mph dash and 152mph top speed. That it gets so close to its more powerful sibling is partly down to weight – with all-wheel drive, the 276bhp model tips the scales at 1615kg, next to the front-wheel drive’s 1505kg. 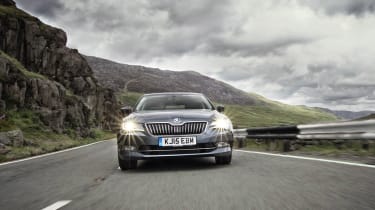 All-wheel drive does of course have traction benefits, but both models feel quick. The DSG gearbox offers slick changes, allowing easy access to the performance. In manual mode these changes feel even faster, with both up- and downshifts just a click of the steering wheel mounted paddles away. And when flat out, the DSG gearbox adds a slight jolt to each change, making an otherwise clinical process feel much more involving.

A drive in the 187bhp diesel isn’t quite as fun, but it’s impressive in its own way. Refinement is better than most applications of this diesel lump, and there’s enough brawn for comfortable overtaking manoeuvres with just a single downchange.

The new Superb is lighter than its predecessor - the lightest model weighs 1300kg and even in spec-heavy L&K trim with the 2-litre engine and four-wheel-drive weighs in at 1540kg. Across all models, the brakes feel more than up to the task of dragging the hatch to a halt, and there’s reasonable pedal feel too, if not quite the tactility you’d expect from more overtly sporting Skodas.

Share this on TwitterShare this on FacebookEmail
Go Back toSkoda Superb review - the best large family car to drive?
Continue ReadingEngine and gearbox