Acceleration is comfortably on a par with that of rivals, and the engine feels strong, with good response and more control than before 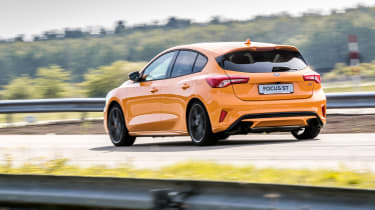 With a useful shot of power and torque from the 2.3-litre unit the ST is capable of expectedly strong performance. Get a clean launch – something made easier with the optional Performance Pack, which adds launch control – and the ST will scrabble to 62mph in 5.7sec, eight-tenths quicker than the old ST and smack bang in the ballpark for the current generation of hot hatches.

Actually, ‘scrabble’ is probably unfair, as traction is much better this time around so whether on a straight road or powering out of a corner, getting the power down is an easier job – something presumably aided by standard ‘Enhanced Torque Vectoring’. Top speed is quoted as 155mph.

The diesel model, making considerably less power than the petrol, isn’t quite as brisk. It’s not bad though, with a 7.6sec 0-62mph time and 137mph top speed, though emphasis here is probably more on its 58.7mpg combined economy (35.8mpg for the petrol) rather than outright performance. 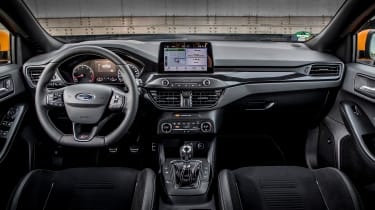 Ever since the second-generation Focus ST with its 2.5-litre straight-five, Ford has attempted to give its hot hatchbacks a distinctive engine note. That’s present and correct here in the petrol, with a snarl that’s clearly more induction than exhaust and sounds reasonably genuine.

In Sport mode you get more of it sooner, and the same goes for throttle response, but the unruly hit of power of the old car has been smoothed out with the new engine. It pulls hard from low down, but in a fairly linear way all the way to the red line. You need around 2000rpm on the clock before it starts pulling hard, and even above that it’s not completely lag-free, but considering outright power is down on several key rivals, the ST lacks little in terms of straight-line pace.

It’ll shed speed easily enough on the way back down too, with strong brakes and decent pedal feel. We’ve not yet spent enough time on track to see how the brakes stand up to prolonged heavy use, but that opportunity should arrive soon enough.