Whereas the interior design really does take full advantage of Tesla’s innovative stance and technical package, exterior styling is perhaps less successful. Still working on a version of the original Tesla Model S Concept that was penned by Henrik Fisker, the Model 3’s more cab-forward stance and low scuttle leave the Model 3 looking a little dull from some angles, and downright odd from others. At any angle from straight-ahead to a front three-quarter, the vast windscreen and low nose look out of proportion and top-heavy. The nose, bereft of any real heavy detailing or graphics aside from the LED headlights, is also dull rather than clean.

To hide the low scuttle, the Model 3 has a large amount of wedge in its profile, with the shoulderline and glazing rapidly rising towards the short, pert tail. Due to the single-piece rear windscreen and roof glass, the bootlid actually opens up like it would on a saloon, revealing a well-sized boot accessible through a relatively small opening. Perhaps an example of Tesla’s relative lack of experience is the bootlid’s propensity to dump all the water collected into the boot upon opening, as it seems to just miss the boot guttering and splat right inside the opening. So too the headlights are merely average (quite terrible, in fact), the doors clunk with a disconcerting fragility, the key card (although a phone app also works) sometimes failed to open the doors for us, leading to a albeit short-lived panic of being locked out in a random location, and the rear lights quickly filled with condensation as if a small dumpling steamer was in use under the rear parcel shelf.

Most of the Model 3 feels like a genuine breath of fresh air though, and its reasonable price point makes the build quality less of an issue than on a £120k Model X with panel gaps big enough to swallow whole sandwiches and doors that won’t open in the pouring rain. Tesla still has some way to go before it starts building cars that make you feel confident about their longevity, but it might just have built sufficient enthusiasm to keep going long enough to see the last of these problems through. 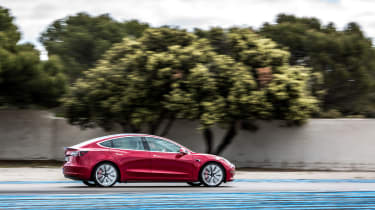