Without a traditional engine the Model 3’s technical makeup is quite simple. The layout is of the same skateboard-style chassis that Tesla pioneered with the Model S, placing the batteries in a single, low-mounted sheet under the cabin. All models feature a powered rear axle, with the motor and transmission sat between the rear wheels. Dual-motor versions pick up a second motor on the front axle for improved acceleration and traction. Both suspension systems are classified as multi-link, but differ from the usual layouts thanks to the inherently different requirements of the electric powertrain’s technical packaging.

Power figures do vary across the range, with entry-level models rated at an equivalent 279bhp, which is directed to the rear wheels in between which the motor is mounted through a direct-drive transmission. Long Range models build on this with a second front-mounted motor for a peak of 406bhp combined, which is the important part as the motors produce different power curves over the course of the rev band (yes, electric cars still have those), but for the sake of simplicity, combined is about close enough. The Performance model has a higher 466bhp combined figure, and no doubt plenty of software changes aiding its startlingly fast acceleration.

The Model 3 doesn’t have a multi-gear transmission as you’ll find on a Porsche Taycan, but the Model 3’s Amercian origins do mean that the high-speed cruising the Porsche has undoubtedly been designed for hasn’t really been taken into consideration. Track mode is the heart of the Model 3 Performance. It’s selected without fanfare, with just one on-screen disclaimer to bat away with a further press before it’s live. In normal automotive parlance it sounds like it should be an ESP setting, but it’s far, far more than that.

Not only are the battery and motors set for maximum performance, but the strategy of the 3’s two cooling circuits evolves to keep them as cool as possible (even pre-cooling them), heat being the great enemy of an EV. The engineers we spoke to are confident the Performance could complete hard sessions at a trackday and not experience any major drop-off in power, and that the battery could realistically last until lunchtime, when a charge while you ate your sandwiches would see it ready for an afternoon’s lapping. But it’s what it does to the dynamics that’s really interesting. The Model 3 wasn’t conceived to be a sporting machine, but late in its development Elon Musk decreed that it should be quicker around a track than a BMW M3, and at that point an engineer stuck his hand up and confessed he’d been working on something that might help with that… 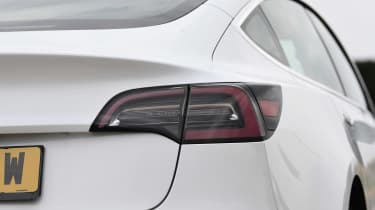