Compact sports car proportions give off the right impression and it looks more exotic than the price would have you believe. Details are less successful. 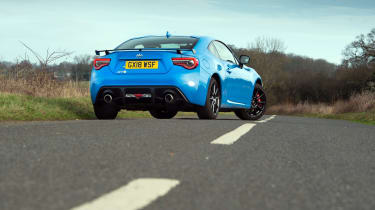 In 2017 the GT86 got a host of aesthetic updates, but nothing major. After five years on sale, a tightening up of the car’s appearance was inevitable and is generally welcome. The biggest change was to the front bumper, set lower and wider, and features two abrupt ‘teeth’ set into its lower jaw. That we're not so sure about.

The black moulding at the rear is a better effort though, housing the exhaust tips and an enlarged diffuser element, which now extends low enough to hide the exhaust silencer. The most noticeable amendment, however, is probably the new rear wing, which comes as standard on Pro models and replaces the slightly odd spoiler tacked to the boot lid of the original car.

Its body-coloured endplates are in contrast to the black surface, and Toyota says the new bodywork helps control body roll and increases stability at high speed (top speed is 140mph).

Also new are 17-inch, ten-spoke alloy wheels that are machine-finished for a two-tone effect, while Performance Pack cars get a more subtle (and to our eyes, more attractive) multi-spoke design. The fresh headlight and tail lights, meanwhile, are sharp LED units that are fantastically piercing and probably do most to bring the facelifted model up to date. The tail lights in particular are an improvement over the Fast-and-Furious-era clear lenses used beforehand.