It’s fast, fun and built to last, and it’s one of our all-time favourite hot hatchbacks, too. We help you to find a good one 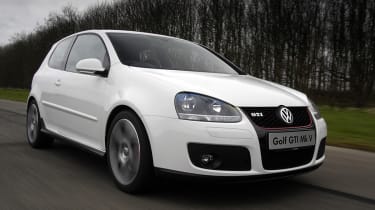 Andy McLeish is one of the technical gurus at APS in Brackley. VW-trained, he has decades of experience and takes us through some of the points to look for. ‘Generally, the mk5 GTI is a pretty bulletproof car,’ he says, ‘but there are a few areas to check.’ Engine

While the engine is excellent, it is also inherently noisy. This only really becomes an issue when there is a specific problem that could be masked. For example, a rattle that disappears soon after start-up but reappears a couple of miles later could indicate a problem with the camshaft-driven fuel pump.

The turbo’s diverter valve (dump valve) uses an electronically controlled rubber diaphragm to dump charge air back into the intake system. The diaphragm can split, though, leading to a loss of boost and a fault light on the dashboard.

The engine cover houses the air filter and it can be a pain to remove, leading to broken covers. While this doesn’t cause problems, a replacement cover can be expensive.

Coil packs tend to go in groups, so a misfire could be a telltale that the packs are on their way out.

Changing the timing belt can be awkward, as the exhaust downpipe has to be removed to get access. If the bolts come out with no trouble, then it’s a straightforward job; if not, they need drilling out. APS recommends changing the water pump and thermostat at the same time (every 70,000 miles or four years).

APS also strongly recommends an oil change every year or 10,000 miles to prevent the oil from degenerating and causing problems.

The six-speed manual transmission shouldn’t give you any worries. However, a heavy clutch is one that is on its way out.

The DSG gearbox should be smooth and effortless, but a complete service history is crucial. If it hasn’t been looked after properly, it can hang on to gears, hunt around and give very jerky changes. ‘Anything wrong will be expensive to remedy,’ warns Andy. Suspension, wheels and brakes

The mk5 can suffer from uneven tyre wear, particularly at the rear because of the amount of suspension adjustment available. If the rear camber and toe angles are incorrect, the inner edges of the tyres will wear far faster than the centre sections or outer edges, so a careful check is essential.

There have also been issues with rear springs breaking, so check for an uneven stance. This is not a disaster, though, as springs are readily available and it’s a straightforward repair.

The rear bushes on the front wishbones become weak, which can lead to the caster angle changing and feathering of the inside of the tyre.

The brakes are generally very good but be aware that when the pads need replacing, the discs generally do too.

Chassis, bodyAs with other Volkswagens, the body is very well put together. Just make the usual checks for consistent panel gaps and paint colour to ensure the car hasn’t been pranged.  Interior

The interior is well built and uses quality materials, but make sure the condition matches the mileage.

‘Air conditioning compressors can fail,’ warns Andy, ‘so always check the air con works. If it doesn’t, it could be a high-pressure switch or it could be the compressor – originals cost £1000.’

Parts Prices (Supplied by APS, Brackley, Bucks. All prices include VAT at 17.5 per cent but not fitting)