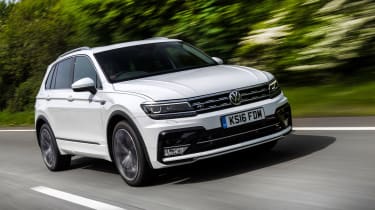 In much the same way you wouldn’t expect the Tiguan to be fast in a straight line, you wouldn’t expect it to be particularly lively in the corners. SUVs, with their lofty ride-heights and hefty kerb weights, don’t often materialise as real drivers’ cars.

The Tiguan doesn’t buck that trend quite as unequivocally as it does its expected acceleration figures, but rather than feeling like a dumpy off-roader there’s a sophistication to the way it drives that certainly has its appeal.

The suspension feels long-legged, more so even than its close relatives, and it rides over bigger bumps with composure, each wheel staying clearly independent from the others. Harsh road surfaces do make themselves known within the cabin when riding on 20-inch wheels, however – we suspect that the smaller wheels paired with bigger tyres would help the situation. 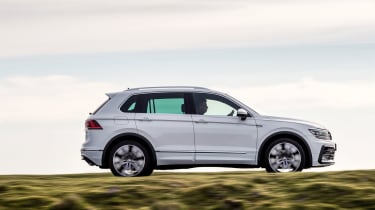 The Tiguan has a surprisingly slow steering ratio when compared to many modern electronic power-steering systems, that often feel hyperactive and overly darty. But even though it isn’t fast there’s no slack whatsoever, and each movement of the wheel is followed by a clear reaction from the car. These slower steering responses do allow you to make considered inputs, so you can be very accurate when pointing the Tiguan through a corner.

On typical British B-roads, the Tiguan feels far lighter than its Tonka-toy looks might suggest. This lack of mass allows you to maintain decent momentum through corners, using the lightest dab of the brakes or a lift to trim the tiniest amount of speed. Add this to the raised seating position, that grants you that little extra degree of vision over hedges and tall verges, and you can get into a satisfying flow down almost any road.

This rhythm is helped further by the body not tilting or rolling excessively. Unlike lots of off-roaders, the Tiguan’s mass doesn’t feel as though it has to be reigned-in by heavily reinforced suspension components or bullied into staying upright by complex electromechanical systems. Instead, it feels natural and predictable, far more like a conventional car than an SUV. 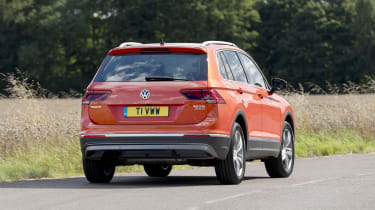 But although the Tiguan is an accomplished SUV, its character falls somewhere between the Ateca and Kodiaq, spanning the bridge between sporty and utilitarian, averaging out each car’s attributes. It’s possible it’s trying to be more luxurious, but as it doesn’t isolate the cabin from rough roads all that well, it doesn’t quite achieve this goal. Without a distinct character of its own, the Tiguan is less memorable than its relatives, making it harder to feel any passion for, no matter how good it is.