New 2018 Volkswagen Touareg review – a Bentayga without the badge? - Engine and gearbox

As previously mentioned, the new Touareg is available with a single 282bhp V6 TDi engine shared with many an Audi. The engine is impeccably hushed, with only a soft dieselly grumble before it quickly becomes near-silent at higher operating speeds. Although power is impressive, it’s the car’s 443lb ft of torque that gives the Touareg its deep reserves of effortless performance.

Unfortunately, accessing that performance can be a little tricky, as like so many modern diesels, response seems to come at the mercy of efficiency, with, as mentioned above, the gearbox quickly shuffling to the highest gear possible. The gearbox’s constant need to kick down a load of ratios when called upon only accentuates the Touareg’s turbo lag, making it feel lethargic at times. Once up and running, the Touareg is as fast as you could reasonably wish it to be, but it lacks the crispness we’ve come to expect in rivals like the Porsche Cayenne and BMW X5.

The eight-speed ZF-sourced automatic gearbox is otherwise seamless, swapping between its ratios imperceptibly as it gathers speed on the motorway. Drive with a gentle gait and the whole drivetrain quickly recedes into the background, as one would expect of an SUV such as this, but hustle and it starts to become undone. Later in 2018 two further engines will be offered, topping and tailing the range. The first will be a 228bhp version of the same V6, while a 417bhp V8 TDI, spiritual successor to the original V10 TDI, will act as a halo model for the entire VW range. 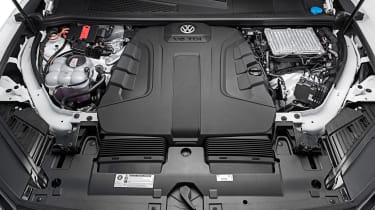