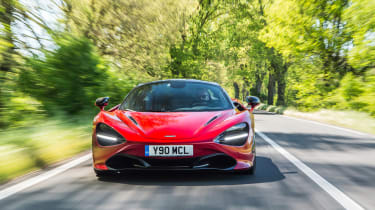 The McLaren 720S is current Super Series flagship of the British brand’s line-up, effectively replacing the old 650S. Featuring an all-new body design made from superformed aluminium with gullwing doors and lots of concealed vents and ducts for a smooth appearance – apart from the signature ‘eye socket’ headlamp-cum-air intakes.

The bi-turbo V8 engine is bigger than before at 4.0-litres, developing a monster 710bhp (720ps), and the suspension is a revised version of the original ‘Proactive Chassis Control’ (PCC), with more sensors, that manages roll and pitch even more effectively. In short, it’s not just a new look, it’s a faster, more capable car. And it features a drift-mode, too. Which is nice.

Drive the 720S and it feels more than just a step on from the 650 S: it feels like a gamechanger. The performance is what you’ll notice first, the twin turbo V8 firing you down straights with the sort of violence that was previously the preserve of a select band of hypercars. Sure the engine lacks the spine-tingling soundtrack of a Ferrari or Lamborghini, but when the acceleration is this explosive you’re willing to cut it a little slack. 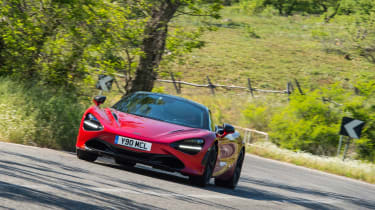 Perhaps even more impressive than the pace is the McLaren’s remarkable chassis. There are numerous driver modes to choose from, but the bottom line is that the 720S can play scalpel sharp track tool one moment and comfortable commuter the next – it’s bandwidth of abilities is jaw-droppingly wide. It’s blessed with a cabin that manages to be spacious and easy to see out of, yet also incredibly cosseting and special in feel.

Such talents can’t go unnoticed, so you’ll not be surprised to find our favourite supercar is also our 2017 Car of the Year.

Engine and gearbox - Twin turbo V8 and seven-speed twin-clutch gearbox is the only engine and transmission combo.

Ride and handling - Ability to blend pointy and balanced handling with supple ride makes the chassis a work of brilliance.

MPG and running costs - It’s a 200+mph supercar, so rest assured its capable of using lots of fuel and emitting more CO2 than a family hatchback.

Interior and tech - Boldly styled and spacious interior is packed with tech, although not all of it is easy to use.

The 720S takes the McLaren Super Series car well into the £200k bracket, with prices starting at £210,355. Dip into the MSO catalogue and the price will rise in line with the endless array of personalisation options. The list includes the lovely, exposed carbonfibre A-pillars on the inside, transparent panels for the gullwing doors for the full glasshouse experience and a McLaren track telemetry app. 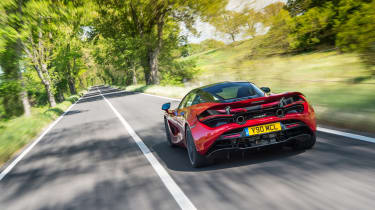 On paper it makes the £184,844 Ferrari 488 GTB look like a bit of a bargain, but it’s worth remembering that the Ferrari’s similarly-sized and blown V8 musters ‘just’ 661bhp. Still, what it lacks in firepower it makes up for with music, while the remarkably adept chassis makes the 488 surprisingly approachable and fun for such a powerful mid-engined machine.

Also from Italy is the Lamborghini Huracan Performante, which at £209,980 comes close on price, but with 631bhp it’s even further down on power. That said, it exceeds even the Ferrari for emotion and drama, and that’s largely down to that naturally aspirated V10, which goes full orchestra to the 488’s string quartet and the McLaren’s lo-fi garage guitar band. There’s also real sophistication in the Lambo’s chassis, even if it’s a slightly spikier prospect than its rivals here.