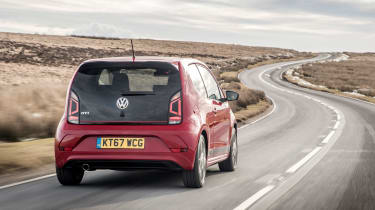 One of the benefits of a small, light and not that powerful warm hatch is that you can almost guarantee it will be cheap to run. But, perhaps, not quite as cheap as VW would have you believe. The official combined fuel economy figure for the Up GTI is 58.9mpg, but during our test, where we covered over 100 miles and spent nearly five hours behind the wheel, we averaged just over half that, with 31mpg. Admittedly, that was during a lot of relatively quick road driving – the sort of driving the GTI is designed for – with not a lot of cruising, so we’d expect to see a more representative average mpg figure somewhere between the two.

The Up’s focus on grip and composure, combined with that modest power and weight, means you’re unlikely to be wearing through its tyres very quickly. However, a full set of 195/40 R17 Goodyear EfficientGrip Performance tyres, the rubber fitted to our test car, cost just less than £400, fitted. A reasonable price for any tyres for a hot hatch. 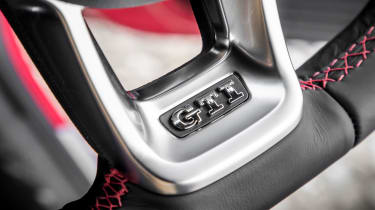