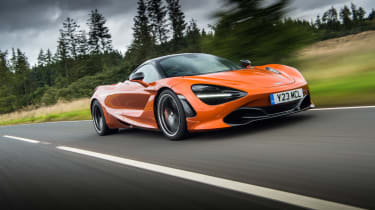 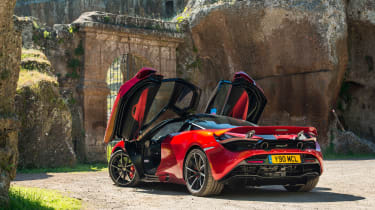 Yet the raw data only tells half the story, because it’s the way the 720 delivers its performance that literally has you gasping for breath. Like other McLarens there’s the merest hint of a pause, as if the turbos are taking a deep breath, before the 4.0-litre unit unleashes the full force of its Volcanic muscle. To squeeze the throttle to the floor is to enter a warp drive moment, where time and space are temporarily left scratching their heads at the physics-mocking ferocity of it all. In truth it’s too fast for the road, and you’ll need to pick your moments with care, but when the tarmac opens up and you do indulge, the moment will live with you long after you’ve stamped on strong carbon ceramic brakes and re-entered the real world.

Sure, the 720’s slightly industrial sounding V8 doesn’t perform with the same musicality as a Ferrari’s, but we kind of like the guttural growl that’s overlayed with whoosh and sigh of turbocharger and wastegate.