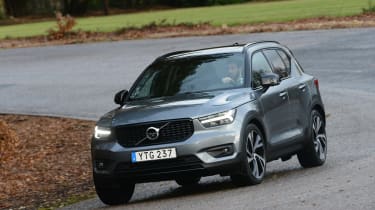 Volvo has ditched a complicated line-up of bespoke engines in favour of a BMW-style modular approach, spinning three and four-cylinder petrols and diesels off the same basic block. The entry-level three-cylinder is a pleasant enough unit, spinning sweetly and relishing hard work. It’s mated to a six-speed manual that’s precise enough, if a little notchy in operation.

All the diesels are essentially the same 2-litre capacity with varying power and torque outputs. They’re reasonably refined, thanks in part to decent sound insulation, and pull strongly in the mid-ranges, making them a strong companion for the eight-speed auto, which shifts up early to make maximum use of the engine’s twist. So effective are these units at low to medium revs that there’s no real point in working them hard, not least because the four-cylinder becomes strained. 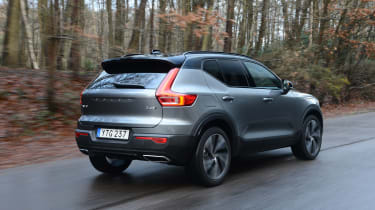 In many respects, the torquey four-cylinder petrols behave much like the diesels, preferring to do their work in the mid-ranges rather than chasing the red line. The T4 is a respectable performer, while the T5 can set a pace that’s close to that of a warm hatch, even if its drones a bit and doesn’t really relish hard work. Perhaps the biggest disappointment is that with a T5 badge on the boot you expect the warbling, syncopated war cry made famous by that angular hotshoe the 850, but instead are treated to an anodyne, generic four-pot backbeat.

Of the gearbox choices the smooth eight-speed auto is probably best suited to the XC40, shifting slickly in auto mode and responding promptly if a little jerkily when using the manual mode.