We put Pirelli's latest through its paces 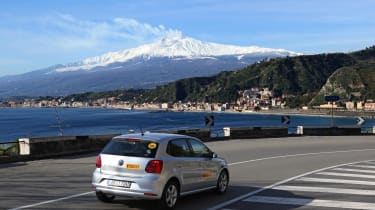 There can’t be many places in the world where you can legitimately test an all-weather tyre in a single day. The availability of warm black-top, heavy rain, sunshine, thick snow and ice all in the same locale – concentrated meteorological peculiarity, in other words – is generally limited to the foothills of the Alps and, closer to home, the odd day in Snowdonia.

You might be surprised to learn that Sicily also qualifies, though; more specifically the Nebrodi region at the northwest tip of the island, during January. The temperate coastal areas are broadly similar to a summer’s day in the UK, yet less than an hour’s drive from historic Catania you’re surrounded by head-height snow drifts halfway up the tallest active volcano in Europe.

The tyre in question is Pirelli’s Cinturato All Season. It’s the first time Formula 1’s supplier has dabbled with serious year-round, whatever-the-weather rubber, and it claims to plug the gap between the Cinturato P7 summer and Cinturato Winter SnowControl tyres. On paper it’s an impressive product, expertly combining attributes of both tyres while simultaneously reducing the risk of aquaplaning.

Before you get too excited, however, know that the latest Cinturato is not designed for fast cars. The largest size is just 17 inches in diameter and 225mm wide. It’s been built with low to medium-powered daily drivers in mind and an emphasis on urban routes and dependability, so your Golf R or McLaren 650S will still require a combination of P Zero and Sottozero 3s for year-round fun.

Following that, it’s no surprise that while the Cinturato All Season hangs on impressively well on dry roads when the pace quickens, the sickeningly light sensation brought on by understeer arrived through the steering wheel of our Mk7 Golf test car noticeably earlier than with most premium summer tyres. There’s a similar occurrence when the roads are damp but with no standing water. 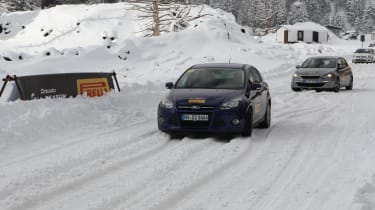 With standing water the All Season performs superbly well, and is capable of displacing 14 litres per second in comparison to the summer Cinturato’s six.

The Cinturato All Season also performs much better on snow – impressively so given the very un-cold-weather-tyre-like softness and quietness with which it dispatches tarmac routes. So long as the hefty tread isn’t clogged with snow, both traction from a standstill and grip during cornering is tremendously reassuring. Acceleration and braking data also shows the All Season to be within ten per cent of Pirelli’s all-out winter tyre in these conditions in performance terms. The summer P7, by comparison, is less than half as effective.

One area in which we don’t manage to test the new tyre was fast motorway cruising. Pirelli presents some convincing simulations demonstrating that at 55mph the All Season is no louder than its non-performance summer tyre. That’s still some way short of the 70-80mph that British drivers maintain on longer journeys, however, and the severe tread pattern may have a negative effect on refinement. 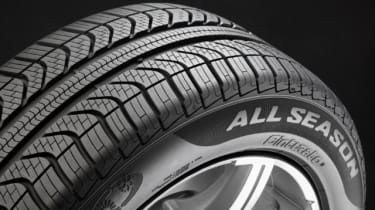 It’s best to think of the Cinturato All Season as a surprisingly refined winter tyre, then. The way Pirelli’s test cars change direction on snow and in slush is at times remarkable in light of how well mannered the tyres are on easygoing dry roads.

As a fit-and-forget-about-it solution for the daily driver in your life, the All Season has one more trick in its locker. An extremely soft compound sits around the inside of the tyre and fills in any fissures resulting from glass, nails, or anything else that can cause a puncture. Pirelli calls the technology Seal Inside, and it allows the tyres to continue operating for far longer than the 50-or-so miles that runflat tyres can sustain after an incident – perhaps even until the tyre needs changing due to wear. It’s a proprietary solution and, without being able to test it comprehensively, seems to something of a landmark achievement in everyday tyre development.

Cinturato All Seasons are not a panacea for most evo readers, largely due to a propensity for understeer even in clement weather and little in the way of communication. For the workhorse in your life, however, you could do a lot worse than shelling out for a set.