We test Audi's new flagship SUV. We're told the Q8 is a coupe but can it really deliver the goods from a driver's perspective? 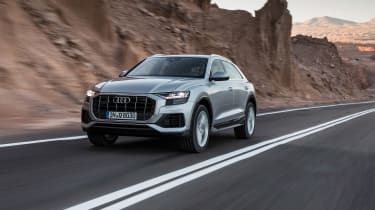 It’s taken a while for Audi to join the coupe-style SUV market, but as the market for lifted vehicles grows it’s better to be late than never.

And even though the Q8’s styling won’t suit all tastes - Audi maintains the boxy arches are inspired by the ur-Quattro, skimming over the fact that they were genuinely functional on that car rather than a stylistic frippery - it’s perhaps the best interpretation of the formula we’ve seen yet. The Q8 looks less uncomfortable than its rivals and its wider, lower silhouette is an undoubted improvement on the Audi Q7 with which it shares so much under the skin.

With five seats to the Q7’s seven it’s the less practical option, but the trade-off, according to Audi, is a more dynamic drive. 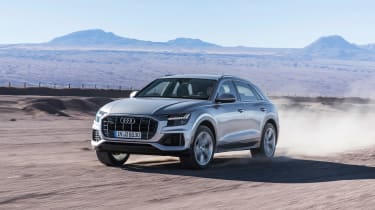 The standard transmission is an eight-speed Tiptronic automatic, with the option to select gears using steering wheel mounted paddles. The behaviour of the gearbox can be adjusted with Audi’s Drive Select system and the car has the ability to coast and recuperate energy thanks to its 48v mild hybrid technology.

Power is sent through a quattro all-wheel drive system with a locking centre differential, with power split 40:60 in normal driving and more still sent to the rear when required. The upshot of all this is a 6.3-second 0-62mph run and a top speed of 144mph. Official fuel consumption and CO2 figures are yet to be confirmed, but a similarly-powered (but slightly lighter) Audi A8 manages 50.4mpg, so expect the taller, heavier Q8 to return a figure in the mid 40s.

There’s little here we haven’t seen before, but to review the basics, the Q8’s structure is what Audi calls its Space Frame concept, a mixture of cast aluminium and high-strength hot-formed steel. Kerb weight is 2145kg for the 3-litre TDI versions, which is still fairly hefty - Audi quotes 2060kg for the seven-seat Q7. Dynamic all-wheel steering, standard on the special Vorsprung models and optional on the S line, does help mitigate the Q8’s size and weight.

Audi’s 48v mild hybrid technology is the same here as we’ve seen previously, using a belt-driven starter/alternator to kick the engine into life, stop it when necessary, recuperate energy under deceleration, and reduce load under acceleration to improve both performance and efficiency.

MMI touch response - a pair of haptic touchscreens in the centre console - and Audi virtual cockpit also make an appearance here, while a suite of driver assistance systems will also be available - 39 in total, including parking pilot and garage pilot to prevent you adding to the Q8’s creases.

Recent large Audis have raised the game with their refinement, but stumbled over the last hurdle with a mix of ride and handling that neither delights those seeking pillowy small bump absorption, nor entertains those who get their thrills from well-weighted steering with detailed feedback. 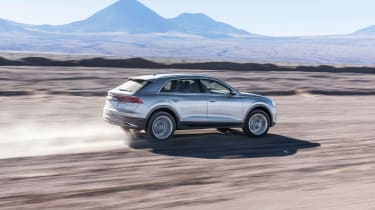 It comes as no great surprise that the Q8 still doesn’t impress in the latter department, though the four-wheel steering feels less of a compromise to stability and precision here than it did on the smaller A6 and A7 - the benefits of a tighter turning circle and slightly quicker responses feel more relevant on a five-metre long, two-plus tonne SUV than on a lighter saloon.

Nudge Audi’s touch-sensitive Drive Select buttons to find Dynamic mode and the extra steering weight is welcome too, while the chassis is balanced enough to feel the centre diff shuffling power towards the rear wheels when powering out of corners. There’s good grip for a car of this size and shape and the brakes feel up to the job too, though the open and flowing roads on the Chile launch venue didn’t require many hard stops.

This is, however, a large Audi on air suspension that finally rides properly. It’s composed at speed and avoids feeling too top-heavy in corners (the wider, lower structure presumably helps here), but it also covers rougher ground without shuddering, rumbling, or introducing vibrations. Hooray, you might think, and we did too - until we were told that the UK would be getting a “Sport” air suspension setup, so we’ll have to wait until we drive the car on UK roads to see whether the Q8 is as unsettled as its stablemates. 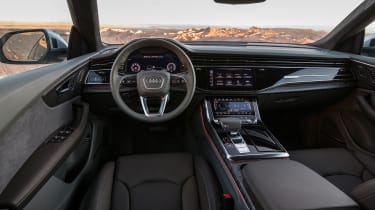 Refinement remains excellent. The frameless windows don’t seem to introduce any undue rustling and the acoustic windscreen means wind noise is generally low. Tyre noise is less apparent here than in some other recent Audis too, perhaps a benefit of the extra metal around you and the greater distance to the road below.

The altitude of the launch venue meant the V6 didn’t feel quite as strong here as it has in other recent applications, but the smooth unit still has little trouble shifting the Q8’s bulk, remaining hushed at lower revs and only becoming audible, and not unpleasantly so, as you reach for the red line. Shifts from the eight-speed ‘box are swift and smooth, though the nature of the car means there’s little incentive to swap cogs yourself beyond the occasional downchange for overtaking or engine braking.

Audi hasn’t yet confirmed pricing for the UK, but the model due to arrive first, the Q8 50 TDI in S line trim, is expected to start around £65,000. For reference, that’s a fair chunk more than the equivalent Q7, which starts at £57,370, though the Q8 does have the more modern cabin and greater levels of technology, so there’s more to the price difference than styling alone. 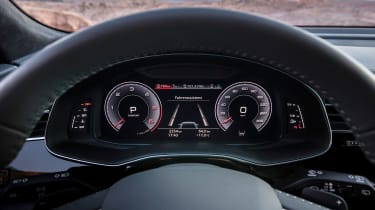 That anticipated pricing figure also puts the Q8 in line with several rivals, including the £65,585 Range Rover Sport SDV6 HSE, the £63,690 BMW X6 xDrive30d M Sport, the £64,380 Mercedes-Benz GLE  350d AMG Night Edition Coupe (yes, there is such a thing), and from left-field, the Maserati Levante Diesel Gransport, which is actually cheapest of the bunch at £62,930.

The Maserati is also the most entertaining as a driver’s car and the draw of that badge is undeniably appealing, but it can’t match the Q8 for technology or build quality. The X6 and GLE Coupe can’t quite reach the Q8’s standards here either and both are challenging on the eyes too, but they also feel slightly more natural on a twisty stretch of road. The Range Rover Sport has improved with the recent facelift and gains a dual touchscreen system not unlike that of the Audi (albeit not as well implemented), and it also drives well by the standards of the class, with true off-road ability for those that desire it. 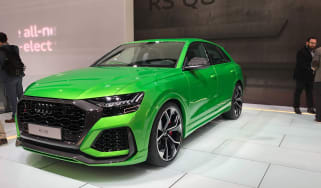 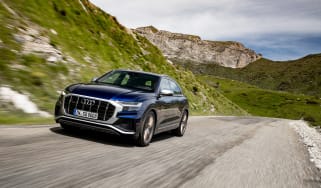 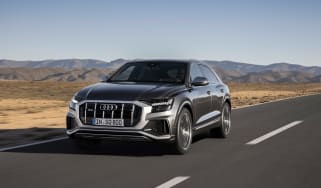