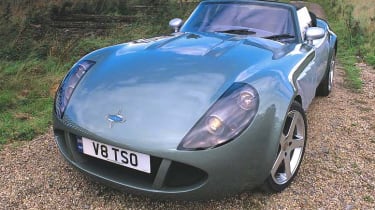 The new Marcos TSO R/T is one of those cars that you desperately want to drive. In many respects it's the quintessential British sports car - traditional front-engine, rear-drive configuration; lightweight glassfibre body; chassis suspended by double wishbone rear-suspension and MacPherson struts up front; steel box-section spaceframe chassis. Pure plucky-Brit stuff.

But swing the huge, sculpted bonnet forward and it reveals a break from tradition: where once a Rover V8 would have stood tall (literally, just check out the bonnet bulge on an old Marcos Mantis) in its place sits a neatly installed 'small-block' Chevy V8.

It's the same 5.7-litre 'LS1' unit that powered the Corvette until recently and can still be found hauling the brutish Vauxhall Monaro around at quite a lick. Marcos buys the V8 direct from GM, but bespoke engine management and exhaust systems help whip up the figures to 400bhp and 394lb ft of torque. As the Yanks would say, you do the math.

Okay, I'll do it for you... With that power, and weighing 1070kg, the TSO R/T packs 381bhp per ton and Marcos predicts that the benchmark sprints to 60mph and 100mph will be covered in around four and nine seconds respectively. Top speed is predicted to be around 185mph. The R/T costs £44,950 and there will be a cheaper, five-speed, 355bhp model simply called TSO, priced at £39,950.

What's refreshing is that the Marcos guys know their new sports car needs more than just straight-line urge to carve a niche for itself. Tony Stelliga, the Canadian-born, California-dwelling MD is committed to making the TSO a friendly and accessible car up to and beyond the limit and on more than one occasion talk turns to 'drifting'. Stelliga is a British sports car fanatic with a TVR Tuscan S amongst his collection. He loves it and admires what TVR has achieved, yet recognises that the company has moved away from the Griffiths and Chimaeras that did so much to establish TVR. He feels that by offering a clean, understated, two-seater convertible with searing performance in the spirit of cars like the Griffith, but with reliability (hence the proven Chevy V8), Marcos can prosper.

We're at Prodrive's development facility in Kenilworth to try the advanced prototype. Marcos now bases itself within Prodrive's site, giving Stelliga's team easy access to the bumpy, poorly-surfaced test track, not to mention Prodrive's skilled engineers; they have overseen chassis design (increasing rigidity by 52 per cent) and are now deep into a development programme for suspension, steering and brakes. Meanwhile, ex-TVR stylist Damian McTaggart is putting the finishing touches to the design, and a brand new CAD-designed interior has just been installed. Marcos is promising that the first cars will be delivered in April.

You can sense that's a realistic timescale within minutes of climbing into the TSO. There are still a few issues to resolve, but in the main it feels secure, predictable and immensely fast - a match for a Tuscan S in absolute terms and more explosive thanks to the huge low-rev torque. Prodrive, working to Marcos's brief, has really worked hard on the TSO's neutral balance and easy-going nature. The damping feels spot-on with a nice underlying tautness that deals quickly and decisively with any nasty mid-corner bumps. However, the ride feels a shade fussy on imperfect surfaces.

The TSO turns-in with conviction, nudging into steady-state understeer as you up the commitment, but the balance can easily be shifted back to neutral and, should conditions allow, beyond. Despite modest 225-section rear tyres, the TSO really digs into the tarmac at the rear but at present this remarkable traction seems to pick up the front of the car and necessitates that you wind on a bit of lock to prevent from running wide.

Weaknesses at present include a knuckly and occasionally obstructive gear linkage, very wide-set brake and throttle pedals and, most importantly, the steering feel. It's just too light, and there's a lack of self-centring so the TSO almost falls on to lock when you dive for an apex. Worse, once you've got the car turned-in there are few signals to tell you how hard the tyres are working. The steering ratio itself is fine and helps the feeling of uniformity of grip and response front-to-rear, but it's a car you have to learn to trust.

A quick stint on Prodrive's test-track highlights just how friendly and progressive the chassis is in extremis but right now it's masked by the lack of steering feel. With well over 300lb ft available at 2500rpm you can pick any gear, nail the throttle and ride out enormous, easily-held power slides but at present you'd never drive the TSO from the rear on the road because you never quite know what the front wheels are up to. Marcos is working on all these areas and knows the steering is the TSO's single biggest failing. Crack that and it'll have a winner.