I always find it mildly amusing that being asked to fork out £50 for the girlfriend's makeup at Boots really gets under my skin, yet shelling out £100 to fill up the Lambo with Optimax doesn't concern me in the slightest. I'm not made of money, it's just a question of priorities. 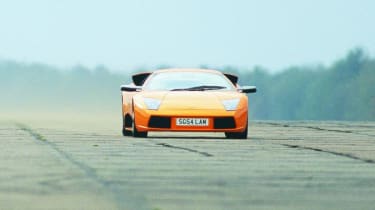 I always find it mildly amusing that being asked to fork out £50 for the girlfriend's makeup at Boots really gets under my skin, yet shelling out £100 to fill up the Lambo with Optimax doesn't concern me in the slightest. I'm not made of money, it's just a question of priorities. Even standing at the side of the M5 in torrential rain, trying to tie a piece of string to a £170,000 Lamborghini hasn't succeeded in dampening my enthusiasm for the Murciélago. Shortly before, the huge pantograph wiper had packed up, leaving me stranded on the hard shoulder near Bristol. The AA man grinned sympathetically and took a few photos for his wife, but couldn't access the loose nut causing the problem. 'I can tow it,' he'd offered hopefully, but eyeing the assortment of hooks and chains on the back of his truck I politely declined. A brainwave, a bottle of handy Rain-X and the aforementioned string later (to stop the wiper riding up the screen), I was back on my way, albeit at 60mph for the next five hours. Marvellous. The next week saw the Murci undergoing a very late but uneventful (and free) 1500-mile service. After which I turned my attention to the 'purposeful' but hardly inspiring-sounding factory exhaust. Coming from a Tubi Style-equipped F355, I reckoned it was time for the boys at Scuderia Systems (01784 434395) to magic a bit of 'rumore' into the Lambo too. Two systems were available, they said: a) Loud b) Louder still. I'll let you guess which one I plumped for. Three days and another credit-card limit later, I stared at the recently delivered huge chrome tailpipes wondering if I'd discovered Saddam's missing WMDs. Beautifully crafted and two-thirds of the weight of the factory set-up, they sound shockingly raucous when cold, but soon mellow into a wonderfully smooth, deep note that sets off car alarms. Very loud when you want it to be, but just within the bounds of acceptability (from the inside at least). Due to the lack of the Lambda sensors, it idles a little unevenly when cold but, hey, so what? I'm still staggered by the enormous size and weight of the original factory silencer, but as a colleague commented, 'it's like that because it works'. Next big event was a blast down the runways at Bruntingthorpe in Leicestershire. Known as Vmax, this is a get-together of like-minded petrolheads with various exotica. Memorable because I twice bottled it by lifting off at around 170mph, before crossing myself and keeping my right foot firmly planted all the way down the main runway. I saw 191mph flash up on the Lambo's on-board computer before some very heavy braking for the looming right-hander had the Brembo discs rumbling and smoking. Great fun and needing little skill, which is just as well. The big V12 hasn't used a drop of the black stuff, which is good news. With a dry-sumped Lambo checking the oil always means risking burning your hand on the lovely aluminium dipstick, as it has to be done when the engine is hot. Changing it isn't such a tricky business as you might expect, thanks to the informative handbook, though dribbling 15 litres of Mobil 1 through two oil filler caps is a time-consuming exercise which I won't attempt again in a hurry. I've also been pleasantly surprised by the tyre wear on both the fronts and rears. There's at least 3000 miles left on both, probably thanks to the shared traction of 4wd, but after a bit of shopping on the net I found the Pirelli P Zero Rosso 335/30 ZR 18 rears at £282, including VAT & delivery, from Micheldever tyres (01962 774437). The 245/35 ZR 18 fronts work out at £154 each, again including VAT and delivery. Bad but not too bad... Problems? The nifty rear spoiler that rises at 65mph has packed up, there's the wiper problem, and then some pillock reversed into the carbonfibre rear bumper, chipping it and pushing it forward into the wheelarch by a good centimetre. Problem was, the Fast Fleet bash to France was two days away. One pleading phone call to Julie Nelson at Lamborghini Manchester saw the Murci on the ramps the very next day, being touched up and having its bumper brackets straightened. Will I go there after the warranty runs out? You bet. I'm still gobsmacked by the amount of attention the Lambo attracts, and unlike the Ferrari, all of it is good. In fact, it's a bit like driving a mobile carnival, especially in petrol stations where it never fails to draw a crowd. You'd be forgiven for thinking the most common question asked was 'How fast does it go?' Erm no. In fact it's 'Does it pull the birds, mate?' And if I confess that I did meet a lovely young lady while we were stuck in standing traffic and pouring rain on the M1 just north of Junction 12, you'd probably guess the answer to that question. Not sure if she would have been quite so keen had I been behind the wheel of a Morris Ital.