What does it take to be a factory test driver on the Nordschleife? We head to Opel’s Performance Centre to find out 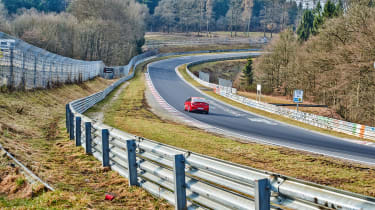 Sitting next to Volker Strycek for a lap of the Nordschleife is an education – he’s intimate with every bump, kerb, crest and nuance. If the name’s familiar it’s because as well as heading up Vauxhall/Opel’s performance car and motorsport division he’s an accomplished racer, too. He won the first-ever DTM championship in 1984 in a BMW 635 CSi, was overall winner of the Nürburgring 24 Hours in 2003 in a V8 Opel Astra and is also one of the drivers of the N24 Kissling Motorsport Opel Manta.

Although racing is still part of Strycek’s life, it’s his work at the Opel Performance Car (OPC) centre at the Nürburgring that’s his priority, particularly training the next generation of engineers.

Part of the reason for our hot lap is so Strycek can demonstrate what he’s looking for in his engineers. ‘If you’re not on the limit you can’t discover or understand what the car is doing,’ he says, pitching the Insignia GSi down the hill at Breidscheid. ‘Our engineers go through extensive training at the Nordschleife to fully learn the circuit, to know where they are, which kind of bump is coming, where the braking area is, where the real turn-in points are.’ 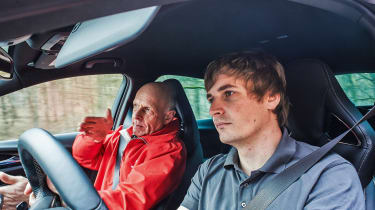 Selecting candidates often starts at the Technical University in Berlin, where Strycek has been a professor since 2006, and his latest protégé, Stefan Fiedler, was one of his students. Fiedler gained experience of working with Strycek on a Formula 3 project and at the end of his studies he approached Strycek to see if an internship would be possible. After his initial time with the company, Strycek asked Fiedler to try out for his team at the OPC.

‘First I went to the proving ground at Dudenhofen where professional drivers coach you, and if you’re good they let Volker know,’ says Fiedler. And while driving ability is important, it’s not the be all and end all, as Strycek explains: ‘We need engineers who are able to feel what the car is doing. To understand why the car is behaving well or behaving badly, that is the crucial thing.’

Once potential candidates have passed the initial assessment it’s time to be tested at the Ring. Not everyone passes. ‘For sure, these young guys will have been playing on the PlayStation, but driving on the real circuit is totally different… it’s not so easy, and very often we send these young engineers home,’ says Strycek. ‘Stefan was one of the lucky ones who made it this far, but then the gruelling work of really learning the Nordschleife started.’ 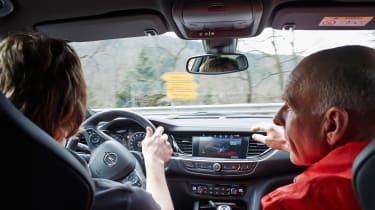 ‘To take part in the industry pool testing days you have to be capable of driving flat-out for six hours a day, so the training is very rigorous,’ says Fiedler. ‘Day after day, 20 or 30 laps a day. At the end of each day you’re really empty.’

Stefan had problems with his neck getting used to the G-forces that it’s subjected to lap after lap. There were also little things about the circuit that he found tricky to master: ‘When you’re driving through Fuchsröhre you have a big compression and shortly after the compression you have to brake as you approach Adenauer Forst, and to start with I found it really hard to lift my foot from the throttle to the brake as the compression is so big there – there were lots of small things like that that I had to overcome.’

While industry days aren’t as busy as some race weekends, there can still be 60 cars on the Nordschleife and Fiedler reckons this is what he found hardest to cope with. ‘Driving in the traffic is difficult, especially if you’re trying to keep to the same line and braking points as the lap before. Sometimes you need to let faster cars past, and it’s hard to judge in the mirrors where it’s coming, how fast it’s coming, should it pass me before the corner or in the corner or after the corner… It’s the same when I need to overtake.’ 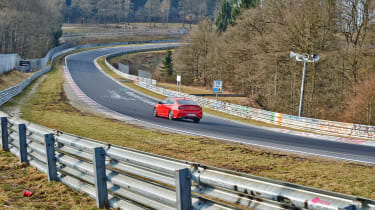 The demanding regime lasted more than three months, and once Strycek and his team were confident Fiedler was ready, he was assessed by a professional driving school for a second opinion. Fiedler was then certified as a bona fide Nordschleife industry day test driver. But it didn’t end there, as a grinning Strycek explains: ‘Now he knows the circuit, the proper training can really start. Now we have to train him to set up the car, to feel what is happening.’

The work at the OPC is rigorous and Fiedler is now immersed in chassis development. Strycek: ‘We’ll dive right down into the hydraulics of the damper – we’re talking about thousandths of a millimetre – friction in the piston, shim stacks, everything in the whole combination makes a car totally different and at the end of the day, much more grippy and turning in a better performance. You can’t do that on the normal road, you have to run absolutely to the limit to feel what the car is doing. We’re talking about damper speed in bump and rebound, high-speed, low-speed damping, deep, deep development in everything – bushings, anti-roll bars, spring rates, and these parts have to combine perfectly.’ 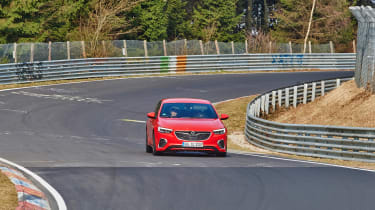 Test cars are driven extensively on the roads that surround the Nürburgring, too. After each change that’s deemed to have worked on the track, a car will also be exhaustively road-tested to make sure that it applies to on-road behaviour, too.

While chassis development is the OPC’s raison d’être, it does highlight other issues. For example, the first seats for the Insignia GSi were rejected by Strycek as being ‘like garden chairs’ – a hot lap of the Nordschleife with the seat designer as a passenger proved his point. Fiedler also pointed to brakes that might have been up to the job when testing commenced, but as chassis revisions helped the car to go significantly quicker are no longer be good enough.

Ultimately, every day at the OPC is a school day. ‘It comes step by step,’ says Fiedler. ‘You’re always in contact with colleagues, and you drive with them and they give you a hint and you learn from everybody, especially Volker. Every day I’m learning.’