Chris Harris at the Ring 24 hours 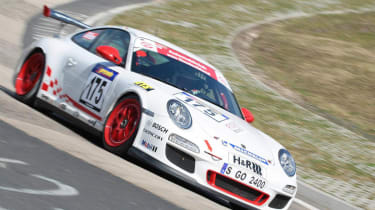 The Nurburgring. The Green Hell. The world's longest and most challenging race track. Of course we love it, ask anyone who's been there and they'll tell you how absurdly addictive it is. But it's one thing to go on a public day and drive your own car around, quite another to compete in the fabled 24 hour race against 230 other cars.

This year three of those cars will have evo team members in them. Here you can keep a track on Chris Harris's progress in his Porsche 911 GT3 RS. Updates work from most recent at the top. Times are CET German time, so chop an hour off for BST...

All of our Nurburgring 24 hour content is this way...

Harris's racing career in a nutshell: 'I won my first race in 2000 in a Formula Palmer Audi single seater race. Raced everything from Formula Ford (I reached the final of the famous Formula Ford Festival in 2008, but got destroyed by all the young kids in the final!) through Lotus Exiges to ASCAR (oval racing), to saloon cars. Also entered a world rally event,  Wales Rally GB, in a Fiesta ST group N and came 1st in class.'

And his Nurburgring history?