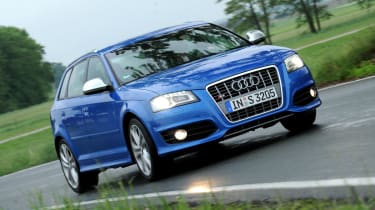 Munich is wet. Proper wet. Cue gags from our hosts about the British bringing the weather with them. Ha, ha. It’s not only the weak jokes that have brought smiles to the Audi faces that surround us, though – it’s the knowledge that the company’s latest model, the ‘new generation’ S3, should shine in conditions that are best described as ‘nice for ducks’.

Let’s deal with the ‘new generation’ tag first, though. It’s a term that’s creeping into automotive launch parlance with increasing frequency. It suggests new-from-the-ground-up, when in fact it’s vague enough to be new-headlights-but-not-much-else. The S3 leans towards the latter, but there are a couple of significant updates. First and foremost is the fact that the S3 is now available in five-door ‘Sportback’ form. Costing £27,720 (£500 more than if you shun the back doors), the Sportback adds 72mm to the car’s overall length but just 40kg to its weight – little enough to allow Audi to claim the same 33.2mpg combined economy figure as the three-door and a 0-62mph time just 0.1sec slower at 5.8sec.

Software updates mean the 2-litre turbo engine now puts out almost 10 per cent less CO2 (199g/km for the three-door, 201g/km for the Sportback), but disappointingly there’s no more power. Why disappointing? Because the new TTS (Driven, evo 119) has 268bhp thanks to its freer flowing intake and exhaust.

Other new bits on the S3 include a quicker-reacting hydraulic centre clutch for the quattro system and, for the first time, the options of Magnetic Ride and a six-speed S-tronic (dual-clutch) transmission, while outside there are a few subtle styling tweaks – including new xenon headlamps with LED daytime running lights – to freshen things up a little.

Does any of this make a fundamental difference to the driving experience? No, not a jot. Safe ’n’ sturdy still sums it up. Despite the conditions, the S3 is gripping hard and finding good traction, so speed across country is not in doubt. That’s backed up by the engine, which now seems to deliver its power in a more progressive, less explosive fashion. However, it’s still the car’s nose that dictates cornering attitude and there’s little you can do with the throttle or steering to upset the 4wd system’s desire to understeer. The S3 is predictable and, although its ride is a touch abrupt, very forgiving, but it doesn’t have a genuine hot hatch’s hunger and sensitivity. From what we can tell on these smooth German roads, Magnetic Ride doesn’t make as much difference here as on the lighter TT, either.

So the new generation S3 is a very adaptable, mature fast hatch that’s nice to be in and good to own, but it lacks an extrovert edge. Business as usual, then. 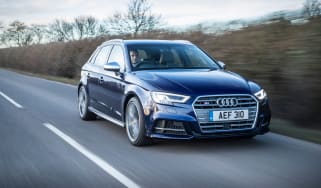 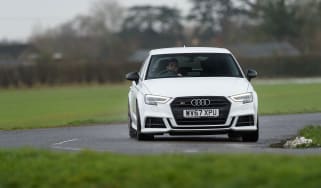 VW Group tuning specialists, Revo, have turned the S3 into more of a drivers’ car
Visit/audi/s3-sportback/13012/2013-audi-s3-sportback-news-and-pictures 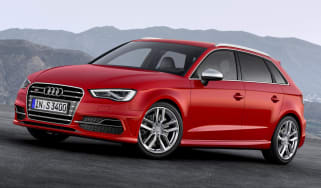