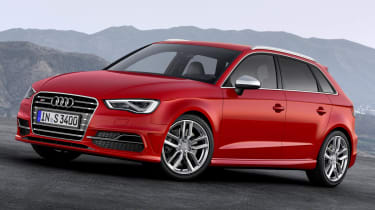 Audi has pulled the wraps off its new S3 Sportback. And by coincidence (or more likely, not), it’s been unveiled on the same day as its five-door, all-wheel-drive foe from Mercedes, the new A45 AMG. The S3 is a tamer hot hatchback, though, with a new version of the sell-out RS3 quattro likely to properly shake up the genre in the coming years. For now, this Sportback is very much a more practical iteration of the third-generation S3 which was unveiled at the 2012 Paris motor show. Power comes from a 296bhp/280lb ft 2-litre four-cylinder turbocharged petrol engine. It drives a Haldex-style all-wheel-drive system, with a six-speed manual gearbox pleasingly standard. A six-speed S-tronic twin-clutch automatic is inevitably an option (and one we’d wager most buyers will specify). The AWD is permanent, with a 59/41 front/rear bias. A 5.0sec sprint to 62mph (5.5sec if you’ve stuck with the manual) pins the S3 back from the new Mercedes A45 a little, though their 155mph limited top speeds are equal as is their 40.9mpg combined mpg figure. The S3’s 149bhp/litre figure is some way off the A45’s 178bhp/litre, but it still displays a level of performance efficiency beyond many supercar engines. The S3 Sportback, at 1445kg, is 70kg lighter than its predecessor, while it’s notably bigger than the regular S3 hatchback, with a 380-litre boot and 35mm-longer wheelbase. Audi’s Drive Select – with comfort, auto, dynamic, efficiency and individual modes – is standard-fit while fully LED headlights and magnetic ride are among the more high-profile options. Audi has yet to confirm S3 Sportback pricing, but says it will be no more than the outgoing car, meaning a price tag of around £31,500. That compares to the £31,085, 316bhp BMW M135i five-door and predicted £35,000 of the new 355bhp Mercedes A45 AMG. The Audi S3 Sportback gets its full unveil at the 2013 Geneva motor show in March, which evo.co.uk will feature live reports and updates from.