Renault Twingo GT vs Volkswagen Up GTI - can small cars do big fun?

Volkswagen has big expectations for its latest supermini, the Up GTI. But does it have what’s needed to topple Renault’s Twingo GT? 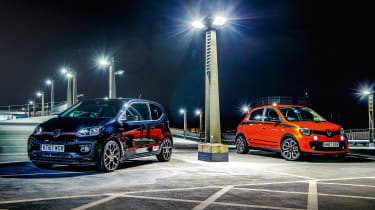 Among the less enjoyable aspects of working at evo – buffing mud off a car in the middle of a hailstorm on a Welsh mountain; losing sensation in your buttocks on a Ryanair flight; failing to find a reliable driving partner on a launch event and having to share a car with a Brexit enthusiast from the Clacton Daily Bugle – trying to turn a seven-feet-wide sports car around between two muddy banks to make another pass for a photographer lurks somewhere towards the top of the list.

A First World problem, I know, but it is one unknown to drivers of the Renault Twingo GT. In this car you almost seek out opportunities to take a wrong turn, just so you can twirl the car around in what feels like its own length and fire off in the opposite direction, chased by turbo whooshes, gear whine and the parp of a three-cylinder exhaust note. The Twingo is to multi-storey car parks what a Rothmans 956 is to the Nordschleife, and it turns the to and fro of a magazine photoshoot into something to relish.

At this one particular task it’s even better than the latest arrival in its class, the Volkswagen Up GTI. Prior to the Twingo GT most manufacturers had abandoned the idea of the hot city car, so the GTI is welcome new competition. We’re clearly not alone in our excitement about it, either, because if you wire your VW dealer the cash, you’ll be tapping your fingers for nearly a year before an Up GTI is delivered. SEAT and Skoda, who make their own versions of the Up, have said they won’t be building Cupra or vRS versions because ‘there isn’t enough demand’, which seems a bit like Decca Records telling the Beatles that guitar groups ‘are on the way out’. 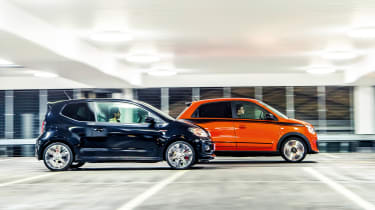 In five-door form, an Up GTI comes in at £100 less than the five-door-only Twingo’s £14,250, but £13,750 gets you the three-door version seen here. Neither VW nor Renault has been able to squeeze a powerful four-cylinder engine into their smallest model, so each has resorted to tweaking an existing sub-litre turbocharged three-cylinder. As such, the VW sports a 113bhp, 999cc motor and the Renault a 108bhp 898cc unit, each representing a useful 20bhp-or-so jump over the next model down in the range. Both cars now scrabble to 62mph in under ten seconds, the Up managing the dash in 8.8sec and the Renault in 9.6.

From here they differ. The Renault’s engine is sited between the rear wheels and drives through a five-speed manual ’box, and the space this liberates at the front is a clue to the hilariously tight turning circle. VW, a brand with plenty of rear-engined heritage, places its engine up front – more like its second people’s car than its first. The Up is shorter, wider and taller than that original Golf, but everything from the stocky shape to the surprisingly similar power and performance figures can claim inspiration.

The GTI loses some of the base Up’s charming, Apple-like simplicity, but counters with a 15mm lower stance over cartoonish 17-inch wheels, a subtle aero kit and the obligatory red GTI pinstripes. Shooting a black car at night causes much consternation for photographer Andy Morgan, but the GTI’s chiselled shape looks effortlessly cool slinking through Cambridge during its darkest hours, street lights, road signs and shop fronts reflecting off its flat sides and glass tailgate. 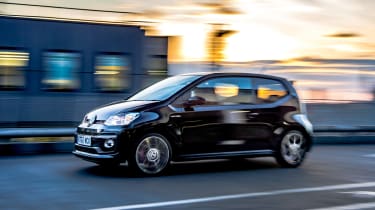 You hop into the Up, the enormous door apertures and high-set, flat, bolstered seats inviting a slightly more carefree entry and egress than most performance cars. There’s a trio of instruments, picked out in crisp white letters with sharp red needles. A calming red glow radiates from an overlap in the dashboard, too, though during the day the red and black graphical pattern splashed across the Up’s dash is less successful. There’s a slim-rimmed steering wheel from the Golf GTI, and also the familiar Jacara tartan fabric – albeit stretched over what appear to be standard Up seats. Predictably, everything feels like it’ll still be operating as intended when Up GTIs are the same age Mk1 Golfs are today.

I made the mistake of going for a drive in my old 106 Rallye before the Up was delivered, and it left me frosty towards the VW for the first few miles. Why is the steering so numb? Why is the brake pedal so soft, and why do I need clown shoes to be able to heel-and-toe? And why, for pity’s sake, are modern cars so damn large?

That’s all a little unfair, of course. The 106 is made from tinfoil and held together with Brie, whereas Volkswagen has, in many respects, found a way to build and sell a Golf GTI for half the usual price. And it’s still great fun. The Up GTI scampers around like a tot-hatch should, the steering finding weight and precision once you move a little further away from the straight-ahead, and finally filtering messages to your palms when the front tyres begin to scrub in harder cornering.

There’s grip, but not so much that it feels endless, and there’s roll, but not so much that you feel all at sea. The wheels sometimes feel like they lack control over sharper bumps and compressions, and the front tyres sometimes scrabble for grip, but this encourages you to learn the car’s limits and work within them. I’d expected to be annoyed by the lack of seat support, too, but to my surprise found I was driving the Up limbs-splayed like in an old Mini, and revelling in the space you have to shift your body, almost as if you can adjust the car’s behaviour like you’re riding a motorcycle. 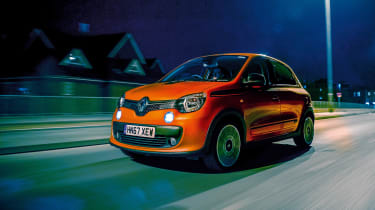 The three-pot is a joy. Some have complained about the artificially enhanced noise filtering its way into the cabin, but given the raison d’être of a car like this is to make you feel like you’re going fast even when you’re not, I’m all for it. The 1-litre begins working hard from around 2000rpm, and the growling builds from 3000rpm through to the 6000rpm red line, doing that baby 911 impression that people can’t help mentioning when talking about three-cylinder engines. You can select gears as quickly as your arm will shift the lever of the six-speed manual ’box, and only at maximum revs does the engine ‘hang’ momentarily between gears and disrupt progress.

The Twingo cuts a slightly different form to that of the Up. More cutesy, less geometric. It appears shorter (it isn’t), taller (it is) and depending on the angle you’re viewing it from, either narrower or wider (it’s basically the same width). It too packs 17s under each arch – and could do with sitting an inch or two lower over them – but brings its own detailing to the party, with a pair of exhaust outlets at the rear, a small air intake vent on the nearside flank, and contrasting cladding around the wheelarches and along the sills.

As outside, so within. The Renault’s cabin is cheerier, with splashes of white leather and orange fabric to distract the eye from the cheap ‘n’ chunky grey plastics, and an amusingly large semi-circular speedometer that at night competes with the central touchscreen for the most distracting glow.

If you’ve missed mechanical noise in recent small cars then the Twingo GT might be for you. The starter whirrs momentarily before the engine grumbles into life, producing more vibration than its rival despite being physically further away. The gearshift’s throw is longer and slightly more obstructive, and accelerating through the gears the whooooo of a turbocharger, eeeeeeee of gear whine and brrrrruuuuuuugggghh of the exhaust all compete for your aural attention. Renault has placed its pedals correctly, and the basic driving position is good, too. You sit high, but because the floor is also high and the windscreen close, the overall effect is actually less MPV-like than in the Up. The Twingo then face plants the next two hurdles: there’s no rev counter, and while, like the Up, it lacks a clutch footrest, there isn’t any room to rest your left foot at all. 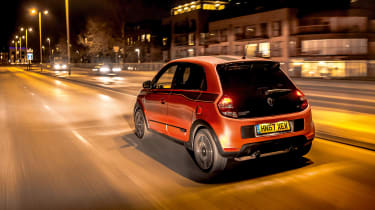 Even if the GT was incapable of generating decent cornering forces this would soon get tiresome (and after a few hours behind the wheel the aches begin to set in), but the Renault has surprising levels of grip. Surprising, initially at least, because the steering tells you virtually nothing, particularly around the straight-ahead, where it’s even less talkative than that of the Up. There’s little self-centring either, which sees you making lots of small adjustments to keep the car in your intended direction and means turn-in is a mixture of experience and guesswork.

The front tyres do bite and they do hang on, but by that point you’ve discovered everything the Twingo’s dynamics have to offer. However you drive, neither end of the car will budge under provocation, so the basic hot hatch joy of an adjustable chassis is denied to you. Drive quickly and you’ll feel the GT’s electronic systems cutting in continually, trimming understeer here and preventing wheelspin there. The ESP can’t be fully disabled, which is no doubt sensible given the car’s young and possibly inexperienced intended audience, but you feel like a child who’s allergic to everything because their parents never let them play outside in the dirt, denied that basic need to learn from your mistakes.

When we arrived in Cambridge, evo content editor Jordan Katsianis had spent the day behind the Twingo’s chunky wheel and summed it up perfectly: ‘You know how we sometimes describe cars as working best at eight-tenths? This feels like a four-tenths car.’ Driven with the utmost smoothness, the Twingo is quick, grippy and probably matches the Up for cross-country pace. Invest any more in terms of speed or technique, though, and the electronics call time on your fun. If you were hoping the rear-engined layout would give the GT a level of expression denied to front-drive rivals, you’ll leave disappointed.

The GTI is set on the safe side, too, rapidly braking individual wheels before it’ll adopt an old-school VW tripod stance through a corner. You can’t turn the ESP off here, either, but the Up feels less restricted by its systems, even if it ultimately lacks dynamic depth itself. But put simply, the Up is more fun more of the time, while its styling and cabin detailing ramp the desirability factor well clear of the likeable but slightly toy-like Renault.

With manufacturers shying away from fun, performance-orientated superminis, both these cars should be celebrated for bucking that trend. For now, Volkswagen has the upper hand over its rivals. L