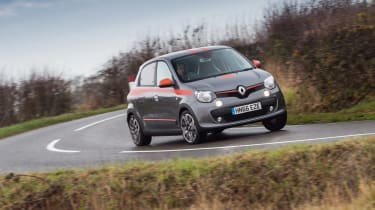 This is the Renault Twingo as imagined by the company’s performance division, Renault Sport. Crucially, though, this warm Twingo is badged as a GT rather than a full Renault Sport model – a successor to the hugely entertaining Twingo 133 this is not.

The third-generation Twingo is a quirky city car with its engine mounted at the back and drive sent to the rear wheels – a layout that's come about as Renault has collaborated with Smart on this generation Twingo, whose Fortwo and Forfour share the rear-engined setup.

That sounds rather promising, but with no space for a bigger, more powerful engine this GT will be the fastest, sportiest model in the Twingo line-up. There will be no full-spec Renault Sport model. As the company discovered soon after launching the Twingo 133 eight years ago, the market for very focused, stiff-riding A-segment cars is very small indeed.

Consequently, Renault Sport was very limited in what it could do with the Twingo GT. The 898cc, three-cylinder turbo engine is carried over from the standard model, with power increased from 89bhp to 109bhp by a remap and a new air vent above the left rear wheel that feeds cooler air to the intake.

The only gearbox option is a five-speed manual. The Twingo GT shuffles itself to 62mph in 9.6 seconds and runs on to 113mph. 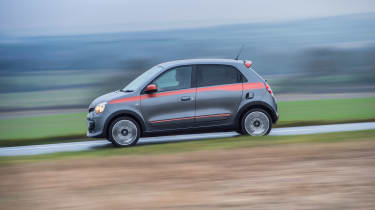 Renault Sport built its reputation on the quality of its chassis, and the Twingo 133 was a fine example of the division’s capabilities. Accordingly Renault Sport has gone to work on the new Twingo’s suspension, but the revisions are relatively minor. The springs and dampers are 40 per cent stiffer and the ride height has been lowered by 20mm, while the front anti-roll bar is thicker than the standard car’s.

The tyres, meanwhile, were developed specifically for the Twingo GT with Yokohama. Renault Sport’s engineers are keen to point out that the electronic stability control has been tweaked to allow a little more slip before cutting in – although the system still can’t be disabled.

Aesthetically the GT can be distinguished from lesser models by its unique graphics, 17-inch wheels and twin exhaust pipes. Just three exterior colours are available for the GT: Lunar Grey, Blaze Orange (both illustrated in our image gallery) and Diamond Black.

If you didn’t know before, it wouldn’t take long to realise that this Twingo GT has not received the full Renault Sport treatment. Consider it a pepped up city car rather than a proper pocket weapon.

The cabin quality is good for the class and there’s decent space inside despite the tiny external dimensions, too. But the Twingo GT always feels like a small car, especially on motorways where it gets knocked about by crosswinds, whereas other cars in this sector feel more grown up than you’d expect. Above 60mph there’s lots of wind noise around the door mirrors, too.

The ride is stiffer than that of the standard car, but it’s not uncomfortable. And although with so little weight and decent grip from the Yokohama tyres the Twingo GT does feel alert and agile, it just isn’t at all exciting to drive. 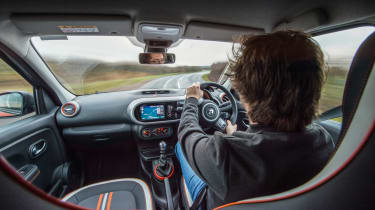 Blame the stability control for that, which both nibbles the brakes and cuts power far too early if you dare load the car up through a corner. The engineers may have allowed a little more slip than in the standard car, but you’d need a series of graphs and spreadsheets to demonstrate that.

The steering, meanwhile, which uses a variable ratio depending on speed, is unpleasantly vague and woolly despite the revised software, giving no real indication of how hard the front axle is working.

Straight-line performance is actually quite punchy, throttle response is much improved over the standard model and the manual gearshift is slick and precise, but the engine labours its way through the rev range rather than picking up with any discernable fizz.

Far from being a massive bonus, the location of the engine is arguably the Twingo GT’s undoing. The engineers have had to design so much safety into the car’s dynamics to keep it from losing control of its forces in extreme circumstances and pitching itself into a tank-slapper that the GT just can’t be persuaded to play ball.

You could drive it for a year and never be aware of where the engine is located or where the power is being sent. That's particularly curious given its cousins from Smart are much keener to demonstrate their unusual layout; stranger still is that Renault Sport headed development of the performance versions from both marques, despite the Brabus badging on the Smarts.

Ultimately, the Twingo GT falls a long way short as an enthusiast’s hot hatch, but as a quirky, attractive and nippy city car, it does have a fair amount going for it. 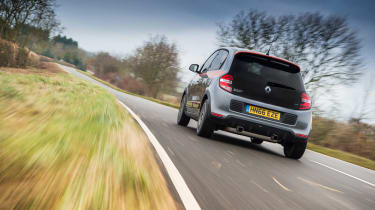 The Twingo GT will be priced at £13,755 and comes fitted with automatic climate control, automatic lights and wipers, cruise control and more as standard.

Renault considers the Twingo GT to be a rival to the Fiat 500 TwinAir rather than the sporty Abarth, which gives an idea of where the French marque is pitching its new warm city runabout.

Like-for-like competition comes in the form of the Smart Fortwo and Forfour Brabus, the latter of those being the closest in spirit to the Twingo offering four seats rather than the Fortwo's pair. The Smart duo and the Twingo were co-developed, and the Twingo GT's mechanicals are closest to those of the Brabus models.

The Twingo represents better value for money, undercutting the Brabus Forfour by over £3000, but Smart's offerings are better to drive, exhibiting more of the characteristics of their rear-engined layout than the ESP-strangled Renault. They do go some way to justifying the extra price with a higher-quality cabin, but it's still a hard sell if you prefer a manual gearbox (the Smarts are auto-only) or aren't phased by the Renault's inert behaviour.