The first rear-engine, rear-drive Renault in years is the clever electric Twizy. We review it 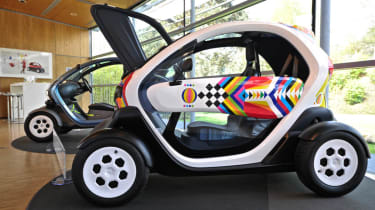 What is it? A very small electric city car. Or a tandem scooter with four wheels. Or go-kart with a roof. Or all of these. It's part of Renault's plan to build more electric cars than anyone else, and to do it now. The Twizy you see here is a prototype, but you'll be able to buy a fully-finished, fully-styled production one from December. Technical highlights Power comes from a rear-mounted electric motor able to give up to 20bhp in bursts or 10bhp continuously. Peak torque is 42lb ft. That's enough for an official 47mph top speed, but it will actually do a little more than that. Charging the battery pack from full flatness takes 3.5 hours, after which the Twizy should run for between 34 and 72 miles depending on how vigorously you drive it. As standard the Twizy has no doors, but you can add openable side bars and transparent lower panels – they open upwards and forwards, supercar-fashion. The chassis is tubular steel, the body is plastic, and the suspension is halfway between a real car's and a radio-controlled model's. It has cute little MacPherson struts at the front and old-Lotus-like Chapman struts at the back. Brakes are discs; neither they nor the steering have power assistance because the Twizy weighs just 450kg including 100kg of battery. There's also a half-power, 28mph version for the French market, which can be driven without a licence – great if you've lost yours for whatever reason. This concession is denied to UK buyers, however… One point for the anoraks. Alpine sports cars excepted, this is the first rear-engine, rear-wheel drive Renault since the Renault 10 faded out in the 1970s. What's it like to drive? Brilliant fun. It has a 6.8m (22ft) turning circle so it's super-manoeuvrable in a tight spot, and it's just 1.19m (under 4ft) wide so the Twizy squeezes through tiny gaps. Once you've switched on and released the fly-off handbrake, it takes off from rest with the rush of energy usual in an electric car. You can hear the narrow, exposed front tyres working and scrubbing as you tackle your first fast bend, but the Twizy scoots through the corner with nothing more than a little understeer. We saw an indicated 85km/h (53mph) on a long straight, but the windscreen and side deflectors kept the draughts at bay. There's no need for a crash helmet as the Twizy is officially a quadricycle or small car, but there's a belt loop for your right shoulder to augment the standard lap-and-diagonal seatbelt which passes over your left shoulder. The steering and brakes are go-kart positive, although the steering is slower-geared for easy parking in impossible spaces, while the low centre of gravity minimises body roll and the ride is pretty smooth. You get a great feeling of being in the picture, but you're also protected if you crash your Twizy – better than in, say, a G-Wiz. You wouldn't want a side impact with an SUV, though. How does it compare? Depends what you're comparing it with. It's far cheaper to run than a secondhand supermini of similar price, more stable than a scooter with more storage space (37 litres in total under the rear seat and either side of the dashboard), far more sophisticated than a G-Wiz. Price will be about £7000 with another £45 a month to lease the battery pack. Anything else I need to know? Options include a rain apron to seal you in up to the waist, a luggage box on top of the rear seat and a Parrot multimedia system with BlueTooth iPod/phone connection and rear speakers. It all sounds a great idea for urban living – except that you need somewhere to charge it up. That's the biggest fly in the ointment.