French supermini goes rear-engined and rear-drive, with 89bhp for the turbo range-topper 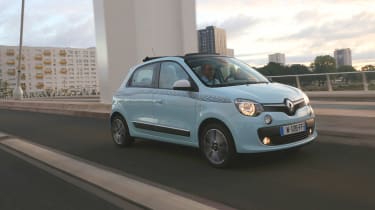 The new Renault Twingo. Thanks to a development and platform-sharing collaboration with Daimler and its new Smart Fortwo and Forfour models, Renault's smallest model turns from a front-wheel drive, three-door hatch based on old Clio mechanicals to a five-door, rear-wheel drive city car with both turbocharged and naturally-aspirated engine options.

The result of this new mechanical layout is a car that could be considered a spiritual successor to the original Fiat 500.

The fundamental principle that informs the new Twingo’s design is that it’s a whole lot simpler to package a small car efficiently if the engine is in the rear. If you’re a bit clever about it and cant over a tiny three-cylinder motor until it’s almost lying on its back, it’ll fit snugly under the rear boot floor, thereby permitting a tailgate and luggage capacity that just about wings it.

Engine, driveshafts and boot tucked away in the tail, the nose can be made much shorter, the front wheels pushed forward and, with plenty of fresh air around them, given enough lock to scribe a turning circle that would be the envy of a London cabbie.

Compared to the outgoing model, its 12cm longer wheelbase allows a roomier cabin within a shorter overall length. Other packaging niceties include a shallow, room-liberating dash and a front passenger seat backrest that folds flat onto the cushion which, with half of the split rear seat backrest similarly folded, would allow a Harlem Globetrotter to have a nice lie down after a hard day’s dribbling, according to Renault. I suspect he’d rather do that than try to sit in the back which seems unfairly handicapped by the generous size of the front seats, rendering legroom rather marginal for anyone over 5ft 8in, though headroom is less of an issue.

Although Renault won’t deny plans for a properly warmed-up Twingo at a future date, for now there are just two engines to choose from, both petrol, three-cylinder twin-cams. The best bet on paper looks to be the 89bhp turbocharged 899cc motor.

Only fitted to the range-topping Dynamique TCe, Renault reckons it will accelerate to 62mph in 10.8sec, reach 103mph and return 65.7mpg (combined), equivalent to 99 g/km of CO2. Pretty nippy for a city car. It feels it, too, but subjectively there are a few gripes, the overtly turbocharged character of the small-capacity engine, with a big bubble of mid-range torque, making progress a bit binary around town.

The throttle response of the base 69bhp naturally-aspirated 1.0-litre unit is far more linear and easy to modulate, though it doesn’t have anything like the turbo’s verve when you venture onto more open roads. Still, 94mph and 0-62mph in 14.5sec, with an average of 67.3mpg and 95g/km will suit most people just fine. Sweet five-speed manual ‘box, too.

Anyway, back to 89bhp, engine in the back and relatively skinny tyres – does the new Twingo handle like an old 911? Umm, no. With a non-switchable ESP and a De Dion rear axle, oversteer is off the table, however hard you try. But for the absence of steering torque effects you’d swear it was front-driven.

Which isn’t to say it isn’t fun. The car’s nimbleness, aided by that comically tight turning circle, make it a nip ‘n’ tuck master in town and it feels equally agile on a twisty country road with a pretty decent ride for good measure. With the motor astern, noise levels are low, too.

The city car market is home to some surprisingly tough competition. While few really register on evo's scale of excitement, the Twingo still has its work cut out.

The Volkswagen Group provides a trio of offerings - the VW Up, Skoda Citigo and SEAT Mii - which differ only in small styling details, colour options and trim levels. Basic prices are lower than that of the Twingo (a Mii in S trim starts from £8,195) but none can match the turbocharged Renault's performance, with 74bhp the maximum power on offer. They are, however, very good city cars.

Fiat's Panda is an evo favourite (we drove it back-to-back with the Up in evo 171) and with a burbly TwinAir engine (fun, but not as frugal as the official figures suggest) has similar performance. Pricing starts at £11,095, cheaper than the equivalent 500.

With a new Smart Fortwo and Forfour on the way soon - probably with Brabus options, eventually - they too may be worth a look. The cheapest Forfour with the same 89bhp engine as the Twingo is £12,215.

The basic Twingo starts at £9495 but you’ll have to pay an extra £500 for air con (which comes as part of an equipment pack). There are plenty of things to play with as standard, though, including DAB, USB and Bluetooth connectivity and a smartphone mount with a free sat nav app. The £11,695 Turbo gets a fixed nav and a healthy dose of extra kit. We await a healthy dose of extra power with interest.