The all new, third generation Smart Fortwo is revealed alongside a Forfour sibling. There should be a new Brabus version, too 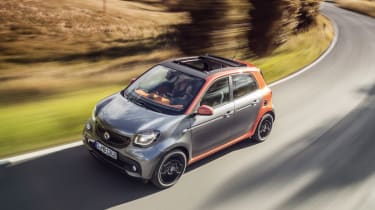 The all-new Smart has been revealed, the tiddly city car entering its third generation. While it’s far from an enthusiast’s car, just like a Land Rover Defender or Ariel Atom, there’s still plenty of intrigue about such a single-minded car.

It remains rear-driven and rear-engined, too, sharing its platform and plenty of components with the new Renault Twingo. That means you can have a Smart Fortwo with a five-speed manual gearbox for the first time, putting (at last) an end to the exceedingly jerky old robotised transmission, which managed to single-handedly quash any attempt at extracting a modicum of driving satisfaction from a Smart. A six-speed twin-clutch paddleshift auto is optional.

The engines are shared with the Twingo, coming from the larger Renault Clio, with the choice of naturally aspirated 70bhp 1-litre and turbocharged 89bhp 900cc units. Both are petrols, with no diesel version at launch. A more powerful turbo engine, with around 110bhp, is set to arrive with a new Smart Brabus hot hatch.

Two versions of the Smart launch simultaneously; at 2.7m, the Fortwo is as dinky as it has always been, while boasting a bigger boot which retains a practical split tailgate. The Forfour name returns for a new five-door supermini variant. While the previous Forfour was developed with Mitsubishi (and flopped after only a couple of years on sale), the new incarnation is a sibling to the five-door only Twingo. It’s been designed to look just like the Fortwo, and its quirky styling may be enough to garner more sales than its more conventional predecessor.

Prices for the new Smart range are set to start at around £11,000, putting it much closer to the Mini than the Volkswagen Up that is currently the default city car choice. Without the Renault collaboration there’s a good chance the Smart brand would have been wrapped up, with profitability still evading the Mercedes offshoot. The Smart Roadster and Coupe – fun little sports cars which never proved financially viable – are therefore very unlikely to ever return.