Second-generation Smart gets some attitude – at a price 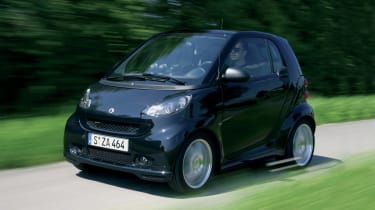 Snap decision: is the Brabus Smart a car you should take the time to learn about? Is it a car for enthusiasts or fashion victims? Well, you probably made that decision in 2002 when the first ‘450’ (the internal code name for the original Smart city car) with big Brabus wheels and more boost for its three-cylinder engine was launched.

But the answer isn’t as clear cut as you might think. Why? Well, the new ‘451’ Brabus Smart is a car of contradictions. It’s mid-engined, rear-drive and has a pukka paddleshift manual gearbox. It weighs just 790kg and has a perky 97bhp, meaning a power-to-weight ratio superior to that of something like the Panda 100HP. Great.

But at the same time the Fortwo is obviously too short and too tall to be a real sports car. In fact, driving dynamics were clearly sacrificed at the altar of urban functionality, and a tweaked turbo, bigger rubber and bodywork stretched over a wider track can’t disguise that the Smart is designed for roads with 30mph speed limits.

Let’s not condemn it just yet, though. The new Smart has had a raft of revisions and it’d be nice to think that driving thrills can be found without a guilty conscience and a licence left in tatters. The most significant change is an increase in engine capacity from 698 to 999cc, but the new Fortwo is also slightly bigger – 195mm longer overall, 55mm of which falls within the wheelbase. It’s still a tiny and relatively light car, though, meaning the Brabus version can reach 62mph in 9.9sec before going on to hit its 95mph limiter.

But it comes at a price. £13,520 to be precise. And if you want the Cabrio that figure rises to £15,470. Ouch. In simple terms the Brabus is hopelessly outclassed by conventional performance hatches at similar money. It’s not as quick in a straight line, less stable under braking, has less mechanical grip and doesn’t flow along a road as convincingly as any of its price rivals. A Mini Cooper would run rings around it.

Yet somehow you just can’t help enjoying yourself in the Brabus. The engine feels almost a bit too much for the layout, and under full load a hurricane of gases blasts out of the twin tailpipes. The new five-speed ’box is quicker than the six-speeder of the old car, too, and the paddleshift is satisfyingly obedient, even if it demands you adopt a strange technique if you want to smooth downchanges – you don’t flick the downshift paddle and simultaneously flex heel to throttle to deliver a well-timed flare of revs, instead you hit the paddle first and then deliberately dial-in the blip to account for the lag in the gearbox programming. An odd quirk that seems entirely natural in such an odd, quirky car.

The chassis is pretty stiff and the short wheelbase means you feel every lump and bump; on Yorkshire’s moorland roads the Brabus’s pace is dictated by the quality of the surface. Try too hard and you’re simply thrown off line. Fortunately the standard-fit (non-switchable) ESP tidies things up without too much drama.

The ESP is pretty busy, too: the torquey little engine even has the yellow telltale flashing in a straight line in second gear, and as soon as any understeer builds (which it does pretty quickly), power is killed instantly. The Brabus Smart needs to be driven smoothly and always within the limits of its thin front tyres if you’re to avoid ESP intervention and clumsy, jerky progress.

All Smarts have non-assisted steering as standard, although you can specify electric assistance for £200. Don’t. The standard set-up is heavyish at very low speeds but is otherwise excellent, helping you to instinctively correct deviations from bumps or crosswinds.

The Brabus certainly has more grip and more attitude than lesser Smarts, but its bigger wheels and stiffer suspension mean it’s also less fluid on British roads. It’s still great fun flicking up and down the ’box, judging the perfect turn-in speed and then bringing in that vocal turbo at the apex, but I can’t help thinking that with a Smart less really is more. At £13,520 it’s hard to take the Brabus seriously. But then I don’t suppose you’re really meant to…