Our Smart Fortwo Brabus wasn't without issues, but it did endear itself to the temporary owner 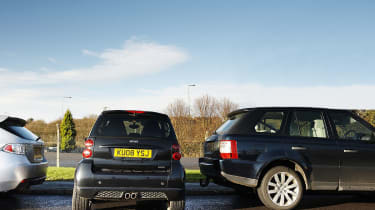 My Brabus Smart has gone, and as the collection driver took it away I felt truly sad that I would no longer be whizzing around in what was the tiniest member of our fleet.

With its cartoon-sized wheels and carton-sized body, the Brabus managed to look simultaneously cute and butch, a trick I don’t think any other car has ever managed, and while 97bhp may not sound like much, it endowed our tiddler with enough zip to wind up a BMW or two. The Smart soon felt out of its depth when the tarmac got twisty and lumpy, though. Its short wheelbase just couldn’t cope with choppy give-and-take roads – the rear wheels would be on a bump before the fronts had recovered from it, and that could be quite hairy at times, leaving you feeling as if you might bounce right off the road.

Another issue was the automated-manual gearbox, which lurched through gearchanges that took an age to complete. In these days of DSG and other hi-tech automatic systems, it really didn’t cut it. You could drive around the problem by lifting off the accelerator when using the paddles to make shifts, but there was no cure when the gearbox was left to operate as an automatic, as it was impossible to second guess when a shift was about to happen.

It was just these characteristics that prevented the Brabus scoring particularly highly in our eco group test back in issue 120. It did prove to be very frugal, though, averaging 45.8mpg over the 300 miles of the test, and only being beaten in the pence-per-mile stakes by a Mégane running on LPG. Interestingly, the Smart can be converted to use LPG, the extra tank being fitted under the passenger seat. It’s a popular conversion in London, apparently, where it makes the car exempt from the Congestion Charge.

And it was in the urban environment where the Brabus really shone, proving nippy, manoeuvrable and easy to park. It almost made driving in heavy traffic fun! If you regularly drive in town then a Smart makes perfect sense. That said, you’d probably still want to have a ‘normal’ car for longer journeys, because dodging trucks on motorways in a Fortwo is no fun, nor are strong crosswinds at high speeds. The Smart was designed as a town car, and that is most definitely what it is.

Inside, there was a surprising amount of room for driver and passenger. In fact, the space was so huge that when the car was borrowed by someone who was unfamiliar with it, it wasn’t unusual for me to find that they’d parked it a comically massive distance from the car in front, simply because they had assumed that there had to be more car out there than they could see. The boot was a reasonable size too – it would take half a dozen bags of shopping – although I was no fan of the two-part tailgate, which could be a fiddle to open.

Despite the quibbles, I still became very attached to the Smart, not least because it had real character – something that’s sadly lacking in most other town cars today.