New Fortwo is a huge step over its predecessor, but still entertains through its character rather than its handling and performance 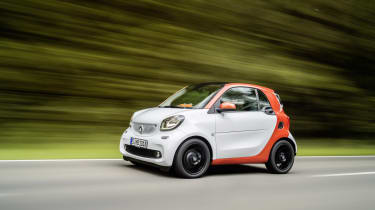 The latest Fortwo is bigger still in width but keeps the second-generation’s dinky length, perfect for parking in the cities the Fortwo calls home.

That’s all well and good, but is it an evo car?  We first tested the original Fortwo in issue 009 and have since run a few – albeit tweaked by Brabus – in the Fast Fleet. Previously, they’ve made up in character and fun what they lacked in outright ability, so we’re intrigued to see whether the new model is any different.

The latest Fortwo comes with a choice of two engines, both co-developed with Smart’s current technology partner Renault. Fitted to our test car is an 88bhp, turbocharged 898cc triple. A 70bhp, 999cc naturally-aspirated petrol three pot is also available.

That 88bhp, and a corresponding 100lb ft of torque from 2500rpm makes it the most powerful non-Brabus Smart yet, if not figures to raise the pulse. Two things make the reality slightly better than the spec sheet however: the first-for-a-smart manual gearbox, and gearing that makes the most of the engine’s limited power. A 10.4sec 0-62mph sprint gives it a significant performance advantage over most rivals. 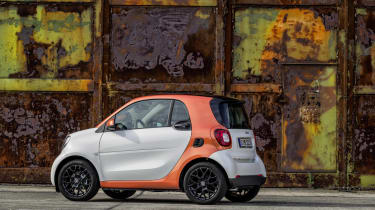 As with the engine, Renault partnered Smart on the Fortwo project. Under the skin it’s very similar to Renault’s new Twingo (which also heralds the return of the four-door Smart Forfour) and shares its rear-engined, rear-wheel drive layout.

The new car is only 5mm longer than the previous model, but 103mm wider. The extra girth ensures greater natural stability than the old model, which in turn has allowed Smart to soften the spring and damper rates for a better ride. A revised layout under the skin has also liberated space at the front axle for a tighter turning circle – the new Fortwo boasts the tightest turning abilities of any current production car, out-swivelling the proverbial London taxi.

A vast improvement if you’ve ever driven the previous models. Simply pulling away from rest allows you to enjoy the benefits wrought by the manual gearbox, responsive steering and improved ride; drive further and you’ll also appreciate the extra stability.

The turbo's boost seems to arrive all at once just below the torque peak, which can make progress a little jerky on a light throttle, but keep the revs up and you can stir the Smart along quite nicely. Cross-country pace is in a different league from the old Fortwo as a result, and swift use of the manual’s light shift eradicates the tedious pauses of the old automated manual that perenially punctuated progress.

Thanks to wide tyres by city car standards – 185-section front and 205-section at the rear – it also has sufficient grip to keep pace with more conventional cars in its class. An ultra-tight turning circle, light, direct steering and short initial gearing give it the upper hand in town too, and while there's still plenty of noise at motorway speeds it's far less prone to wandering than before.

Eventually, the limitations of the layout do begin to surface. Mid-corner bumps can really upset the car’s balance. When they do, the stability control forcefully intervenes to prevent the laws of physics exerting their toll. Understeer isn’t quite as terminal as it was in the previous car, but it’s still the Fortwo’s dominant characteristic – all aimed at mitigating undesirable effects of the short wheelbase, narrow track and tall body.

The best way to extract pace from the Fortwo is still to drive it as smoothly as possible, so as not to rouse the admonishing electronics. But with little steering feel and ultimately a lack of power, you have a car that satiates The Thrill of City Commuting more than it does the Thrill of Driving.

Since Toyota quietly discontinued its iQ city car, the truncated Fortwo is in a market of one. Expand your search to four doors and four-seaters and several rivals come to mind.

One is Smart’s own Forfour. It’s a little more expensive but does offer extra seats for the additional outlay. The Renault Twingo is cheaper and some will prefer the styling, though Smart’s cars have a higher-quality feel – the Fortwo and Forfour’s fabric-covered dash feels a step up from bare plastic.

The conventional class leaders are the Volkswagen Up, Skoda Citigo and SEAT Mii trio. They feel a bit like they’ve had a character bypass after driving the Smart or Renault, and driving thrills are limited here by skinny tyres and low-powered engines, but they’re more affordable and offer greater interior and luggage space.

The Fortwo range currently starts at £11,125 for the 70bhp car in Passion trim. Upgrade to the orange and white Edition #1 driven here and you’re looking at £13,225, though a touchscreen display, satnav, auto headlights and other toys go some way to justifying the cost.

With indiscriminate box-ticking and the turbocharged engine warming your posterior, it’s possible to raise the price to over £14,000 – our spec sheet showed £14,665 – though you can spend similar on the Fortwo’s rivals. City cars aren’t as cheap as they used to be…