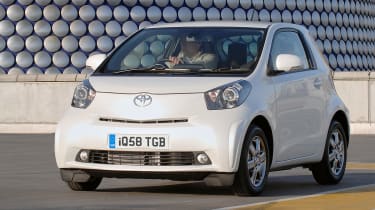 Here’s an ‘evo’ car in its purest sense. Not fast, not viscerally thrilling to drive, but a real evolution of the idea of a small car.

It’s shorter than an original Mini but about a foot wider. The three-cylinder, 1-litre engine is mounted behind the differential instead of ahead of it, keeping the nose overhang low without compromising crash safety. It’s the obvious way to go and other car makers will surely follow.

Other pieces of iQ intelligence? Clever shaping of the dashboard and footwell lets the front passenger sit further forward than the driver, which means there’s space for an adult to sit behind. Anyone aft of the driver needs to be very young and slender of leg, however.

The iQ is meant to be a hip city car for lovers of new gadgets. It’s certainly not ultra-cheap transport; Toyota has the Aygo for that. So the iQ is quite plushly trimmed, at least in the iQ2 form we tried, complete with optional chocolate brown leather trim.

One snag is the lack of any covered storage space inside the cabin, apart from a shallow tray under the foldable rear seat cushion. As for the boot, a MacBook Air is about as much as it will take unless you fold one of the rear seat backrests down. There are even airbags ready to deploy behind rear occupants’ heads. That’s how close they are to the back window.

I had a great time driving the iQ. It attracted huge interest, it romped through the snow, it has the tightest turning circle I’ve ever encountered and it goes well for what it is. Gearing is long and feels longer, because ‘triples’ always sound as if they’re revving less than they really are, so you tend to hang on to lower ratios and conserve momentum, finally reaching fifth for a relaxed motorway cruise. The iQ is quiet and rides far better than such a short wheelbase should allow, and is more flickable into corners than the inert electric steering promises.

And now hear this. The iQ attracts no road tax and is supposed to do over 60mpg. This is a brilliantly original car. What’s more, it works.