Cute and fun to drive, but it comes at a price 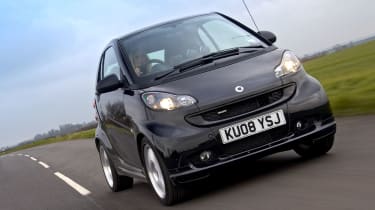 You can’t help but smile when you see the Smart Fortwo Brabus. It’s an endearing thing, with the Fortwo’s cute looks getting a touch of toughness courtesy of Brabus’s beefed-up body kit, wide ‘Monoblock VI’ alloys, 10mm lower suspension and sports exhaust. I never drove the old Smart Fortwo, so I didn’t really know what to expect from this second-generation version. John Barker likened the old one to driving around on a coffee table, so I was a little hesitant when I stepped into the Smart’s cabin for the first time.

With its 97bhp turbocharged 999cc three-cylinder engine having to propel just 790kg, I knew it was going to be lively, but I hadn’t anticipated just how much fun it was going to be. The wide tyres (175 section at the front, 225 at the rear) mean it really sticks to the tarmac. In fact from the lofty driving position it almost feels like it could grip until it falls over! But this excess of grip combined with direct steering means you can throw the Brabus into the bends with ease – as Roger Green took great pleasure in demonstrating to me…

The five-speed automated manual gearbox can be left to operate as an automatic, something it makes a reasonably good job of, although it does lurch slightly when shifting between the lower gears. However, use the paddles mounted on the back of the steering wheel and you get much smoother results, whatever speed you are doing.

One of the first journeys I made in the Smart was down the M1 and around the M25, a slightly daunting prospect in such a small car, and made worse by the strong winds that happened to be battering the UK that day. The combination of light weight, high sides and a short wheelbase certainly don’t make the Smart the ideal choice for long journeys in such conditions – I fought the Fortwo’s steering all the way there and back, trying to keep the car in some sort of straight line.

Those unusual dimensions pay back in other ways, though. At just 2695mm long, the Fortwo opens up a whole new world of parking opportunities. You do need to remember just how small it is, though, as Jethro discovered when he parked the Brabus in the evo car park the other day. When he got out he found there was still several feet to spare in front of the car…

All this fun comes at a price, though. Our Smart has a price tag of £14,375, which includes £330 for a portable navigation system and £310 for electric power steering. Is it worth it? Just ask the rest of the team, who keep asking to borrow it for the evening. Roger also seems keen to get the Brabus on the West Circuit to see how it performs on track. You can be sure I won't be in the passenger seat for that!