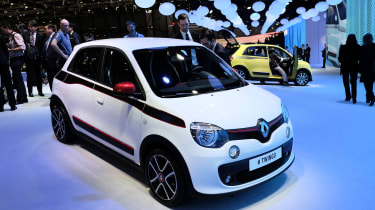 Renault has pulled the covers off the 2014 Twingo with at tghe Geneva motor show. The French carmaker has confirmed that the car will be shown in the metal for the first time at the Geneva Motor Show this March.

The new Twingo features a radically different design to its predecessor, including a rear-mounted engine and five doors. Prioritising cabin space and packaging by moving the engine rearwards, Renault’s engineers hope to not only emulate the innovation that was brought to the sector by the original 1992 car, but also improve city manoeuvrability and interior space.

Teaming up with Mercedes in the development of their next-gen Smart FourTwo, expertise from both sides were shared to create underpinnings that suited both of the manufacturers’ future plans.

Renault’s version appears to have remained true to the original Twin’Run concept revealed last year, a car said to have taken influence from the marque’s classic 5 Turbo. Unsurprisingly the muscular design of the concept’s exterior has been toned down, perhaps leaving design space for a hotter Renaultsport version in the future.

No interior shots have been revealed, though when peering through the roof in pictures of an open top version, nods to the Twin’Run’s design can be seen with a horizontally mounted central cluster that will likely house the R-Link system, and seats that feature headrests like the Twin Run’s buckets. That open top version also looks to use a retracting fabric design as seen on rival Fiat’s 500c.

Renault won’t confirm which engines will provide power to the Twingo until Geneva, but it looks likely that its three cylinder petrol engines will head the options. The 900cc TCe from the larger Clio is a probable choice with the turbo-charged unit producing a useful 90bhp, meaning the rear-driven Twingo should be a hoot around town.

Those three-cylinder engines will most likely offer CO2 levels below 100g/km and close to 80mpg, making the Twingo tax exempt and able to travel through London Congestion Charge free.