One of the cheapest new cars on sale, the Renault Twingo Bizu. It's very good, too 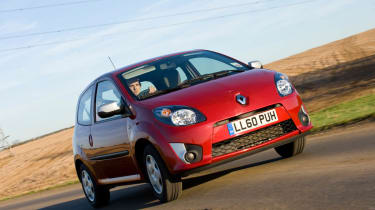 What is it? The Renault Twingo Bizu, a special edition model that costs a mere £6595, making it one of the cheapest brand new cars available. Technical highlights? The mechanicals are pretty plain and simple – a 74bhp 1.2-litre engine drives the front wheels via a snappy five-speed gearbox. The really interesting stuff lies on the standard equipment list, with an AUX input-equipped CD player, Bluetooth connection, Isofix child seat mounts, airbags, electric windows, remote central locking and ABS with electronic brake force distribution all as standard. What’s it like to drive? It’s great fun. The damping is impressively good, and the engine – a 16v four-cylinder unit – is keen and even a pretty refined cruiser, too. While there’s no rev counter, you seem to instinctively end up in the right gear to catch the 1.2’s vivacious powerband. You won’t set any land speed records, but you’ll never struggle to keep up with traffic, either. The steering isn’t fantastic – it’s very light and lacks feel, most noticeably upon quick turn-in, when you require the most confidence. But keep faith and the car corners competently and sticks to its line, while the brakes bite well. It’s a substantial-feeling experience, with less of the character-excused flaws of some of its pricier city car rivals. How does it compare? There’s very little with a brand new list price below £7K. Our favourite titchy car is the Citroen C1/Peugeot 107/Toyota Aygo trio, which come with a very basic specification and a three-cylinder 1-litre engine, but prices begin at £8485. As well as being nearly two grand cheaper, the Twingo Bizu is better equipped and easier to live with. Anything else I need to know? If the Twingo is too small, there are Bizu versions of the Clio, the Megane (in hatchback or Sports Tourer form) and the Scenic people carrier. The Clio starts at £8595, thus matching smaller alternatives such as the C1 on price. Oh, and Bizu translates from French as 'kiss'.