The first rear-engine, rear-drive Renault in years is the clever electric Twizy. As odd to drive as it looks? 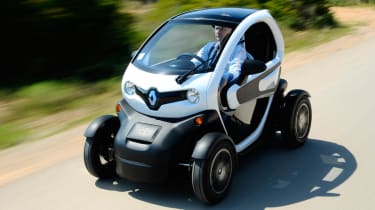 If the name’s not confusing enough, the Renault Twizy is not a car. Cars have windows and proper doors, and are usually two-people wide. It’s not a bike, because it has a windscreen, steering wheel and four wheels. Technically, it’s a quadricycle. And, in case it doesn’t look different enough, it’s an electric one. No Internal combustion in sight. Renault itself describes the odd-looking contraption as an ‘Urban Mobility Solution’. Technical highlights?

The Twizy weighs in at around 450kg and is just 2.34m long and 1.34m wide. There’s no ABS or ESP – driver aids include merely a steering wheel and solid disc brakes with KERS. It’s powered by a set of lithium-ion batteries feeding a 17bhp electric motor with a reduction gear to the rear wheels. Its 50-mile range comes after a 3.5-hour charge from a 220V outlet. There’s outboard wheels and coil-over suspension, with McPherson type front-end and direct rack steering. How does it drive?

Perch yourself – the best way to describe the high driving position – on the seat and it’s like nothing you’ve driven. The dash is spartan, with no air-con or audio, with Drive selected by pushing the dash-mounted button on the left of the fixed steering column.

It’s silent for the first few yards but an electric whine quickly builds up – there are no gears – that reminds us of an airliner winding up for take-off.

The steering is light and easy, but is a little heavy at slow speed, but the first bump will soon reveal the rock hard ride: it’ll launch you out of your seat if you hit one at ‘car’ speed. It’s not that the Twizy can’t handle bumps, as it’s quite compliant, but the lack of suspension travel sends larger ones straight through you. It is fun though – you can actually hear the front tyres scrubbing into corners, and there’s a good amount of grip to place the Twizy as the wind rushes around your head. Grunt is okay, but it’s far from neck-snapping. But would you really want to push this car? Sure, there’s a driver’s airbag, but overall it doesn’t feel super strong and won’t undergo Euro NCAP testing – as, remember, it’s not a car.  How does it compare?

This is a tough one. At £6690 for the base of three trim levels, there are smarter ways to get around town. A GreenTec Skoda Citigo, for instance, costs around £8000 and also undercuts the congestion charge while returning 68.9 mpg – meaning the Twizy’s 50-mile range could be done on less than a fiver, plus there’s no battery lease (see below). It also has windows and a boot, and you can use it in the rain. Makes the Twizy a bit of a novelty – but that’s also the Renault’s strongpoint.  Anything else I need to know?

The Twizy is affordable but you’ll have to factor in battery leasing. There’s no way around this: somewhat like a phone contract, you’ll have to pick a timeframe (anywhere from 12 to 48 months) and pay the monthly fee, which starts at £45. Besides electricity to charge it, that should be all you pay apart from the odd puncture etc as servicing is included for four years.