End of Term for the Brabus, and Janet Mills is sad to see it go 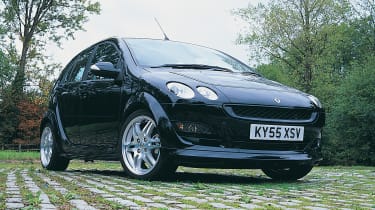 Well that’s it. All over. One year and 13,234 miles after it first arrived, the Smart Forfour Brabus has gone back to its owners. It wasn’t the fastest, flashest or most exciting car on our fleet, but it served me well and never once let me down.

Hardly any money was spent on the Smart while we had it. Just before it went back I took it for its 12,000-mile service at Milton Keynes Mercedes (the bill came to £158.99), and apart from one repaired and one new windscreen, that was the only attention it required.

The Brabus Forfour isn’t a cheap option, though. Its whopping £17,195 list price probably goes some way to explaining why, of the 8760 Smart Forfours DaimlerChrysler UK has sold since the model’s launch, just 215 have been of the Brabus variety. But its rarity helped make ours feel a little bit special, as did its looks. On the outside, the Brabus wheels, exhaust, skirts and spoiler give it a more butch and sporty appearance than a normal small hatch, and with the interior bearing plenty of prominent Brabus logos there was no way you could forget the German tuner’s involvement.

Some of the Smart’s features were less pleasing. The full-length fixed glass roof, for example. If you have a glass roof, why not make it an opening one? The lack of boot space was also annoying and certainly not practical if you had three passengers and luggage to fit in. Having said that, the car was a perfect size for someone travelling on their own, and being so small it was easy to park – always a bonus.

The steering was heavy, though, likewise the clutch, and boy was the road noise overbearing on motorway journeys, but the 174bhp turbocharged 1.5-litre engine meant that it was plenty quick enough (0-62mph taking just 6.9sec), and the smooth gearchange was a joy to use. I particularly enjoyed how kart-like the car felt on country lanes like those surrounding our office. I only have a short journey to work, but in the Smart it was always fun!

I know some of the guys at Evo Towers (Jethro!) weren’t big fans of the Smart, but as an everyday car around town, it served its purpose. I, for one, was sorry to see it go.