John Barker argues why the world still needs supercars, and John Simister explains why he won't mourn their demise 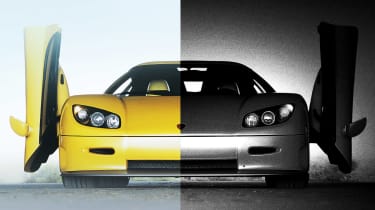 The argument for supercarsSupercars are not a means of getting from A to B. No, supercars take you somewhere else entirely. They excite the emotions with their dramatic, furturistic shapes, their fabulous engines and their fantastic performance. ‘What’s the point? When will you ever be able to use such massive performance?’ wail the kill-joys. Never, perhaps. But it’s the potential that’s tantalising, that fires the imagination, that inspires.

Few people who buy Range Rovers will ever drive them off-road but still they buy them because of their supreme abilities. Similarly, most people who buy supercars will never drive them at or even near their full potential, but they take pleasure from knowing they’re at the wheel of one of the world’s fastest cars.

The environmental impact of supercars is not an issue, either. Yes, these extravagent two-seaters (three if you’re lucky) are so packed full of huge, thirsty engines and impossibly low-snouted that they barely have space for a toothbrush. But as Gordon Murray once pointed out, ‘Supercars are built in such small numbers and cover such low mileages in a year that their impact on the CO2 problem is too small to even measure.’ You can also add that supercars rarely go to the scrapyard, so that their whole-life environmental impact is lower than that of any other type of car. As for pedestrian impact legislation, the chances of being run down by a supercar must be minimal, partly because they’re so rare and partly because you’d surely hear one coming.

Then there’s the positive impact the supercar has on the entire automotive world. Tyre and suspension design, aerodynamics, materials and many more technologies are driven forward by supercars. They are to the car world what jet fighters are to aerospace – they attract some of the brightest and most enthusiastic engineers to the business, a draw of talent that benefits the whole industry and therefore all cars.

You might argue that it’s motorsport that advances many automotive technologies and this is true, but making a component that will last just a few races or even a season on the race-track is quite different to making that same component serviceable for the road. Supercars are often the bridge between track and road, their vast price allowing new technologies to be developed for long-term use in many different environments. A good example of this is carbon/ceramic brakes, which required much work to make them effective at low disc temperatures and in damp conditions. Their use on supercars has increased steadily and it has recently been announced that Brembo and the SGL Group are planning to put them into mass production for regular performance cars.

Yet while the supercar can claim responsibility for advancing car technology, it’s perhaps its unquantifiable impact that is more important. Loris Bicocchi has been key in the development and dynamics of many of the world’s greatest supercars, including the Bugatti Veyron, Pagani Zonda and Koenigsegg CCX. He’s deeply worried about the threat legislation holds for the supercar, should it be rolled out in a blanket fashion. ‘This is a nightmare. Can you imagine our life without supercars, with all the normal small cars the same? For me, everything would become grey. The supercar, it’s like the orchid, not a common flower. If I see one I will stop and spend a few minutes to see how nature can create such beauty. It’s amazing. In car terms, the supercar is the orchid.

‘I still think they can’t stop the supercar. There are hundreds of thousands of people around the world who live for supercars.’

evo contributor Simon George has covered 120,000 miles in his orange Murciélago in less than five years and recently calculated that through his driving experience company, Sixth Gear, a staggering 1778 people had driven it. Do people love supercars? ‘I think so,’ he says. ‘I always get the thumbs up driving a Lamborghini.’ He’s seen a change in the last 18 months as the recession has bitten. ‘Most people knew they were probably never going to own a supercar, but they don’t like to know it for sure,’ he says. But, he adds, as a consequence his business has got even busier. No question, supercars are good for the soul. They’re precious because they inspire, captivate and entertain, at negligible cost to the environment. The world really would be a poorer place without them. John Barker

The argument against supercars

Thing is, you certainly don’t need a supercar to feel those forces. In fact a supercar can get in the way. The fundamental problem with supercars is this: they are so overspecified for the task in hand that they detract from the enjoyment rather than adding to it.

To enjoy a supercar’s specific attributes, the traits that make it special, involves driving at such speed that you run the constant risk of incarceration. You might be driving quite safely and within limits of road-space, but you’ll be far, far beyond what is considered tolerable by society. We hate this fact, but it can’t be denied.

Which means that driving a supercar on the road is mostly a deeply frustrating experience. This is why a relatively humble Porsche Cayman S is a much more entertaining roadmate than a 911 Turbo. Exercising it properly doesn’t make you feel like a fugitive the whole time. That many supercars are ludicrously wide adds to the futility. Which would you rather be in when scuttling along a tight, twisting backroad: a lithe, compact Exige or a hopelessly broad Murcielago?

Yet people still buy them. Often it’s to look good to certain types of eye, to gain status. That in turn makes supercars the object of opprobrium from many. Sometimes I like the idea of owning a Ferrari, for example, but I’d hate the baggage that goes with it unless it were something like a Dino.

As far as driving on real roads is concerned, we have reached a plateau of power and profligacy and the only way now is down. Gordon Murray concurs: ‘Supercars have become more undriveable. They have lost the plot. When we did the F1 back in 1992 we tried then to stop the rot, and thought we’d done so by example, but we didn’t. The ultimate ludicrous bit of stuff is the Veyron, two tonnes and 1000 horsepower. It’s time for another go.

‘There are two issues here. The first has been brought upon us by the build-up of excess followed by the crash. It’s both financial and energy-related, and it leads not just to moral issues but also legislative ones. The period we’ve seen with the volumes of sports cars, SUVs and two-tonne limos is over, and it’s not coming back. That’s a fact.

‘Second, because of the change in attitude and culture, people will look at sports cars in a different way. At the top end, I still think there will be enough buyers for automotive art but there will be more emphasis on being fun to drive, so they will be smaller, lighter and much less powerful. Instead they can make a statement about being light and efficient. Top speed is irrelevant, as it was in 1992. Does it do 210mph, 250? I don’t give a damn!

‘The big change will be in the Ferrari 430, Aston Martin, Porsche category. They won’t sell in the same volumes, and they have to get more efficient or they will be legislated against. We need to get back to basics.’

Simon Wood, technology director of Lotus Engineering, agrees. ‘There will always be a market for a traditional supercar which harks back to a heritage, but forward-looking cars will have to change. Most now have wheels and tyres which are too big and heavy, which they don’t need especially with anti-slip electronics.

‘So for the future a supercar will be small, with good aerodynamics and wheels which aren’t too big, so it can have a smaller engine. It must be nimble, so it will weigh less. There might still be a demand for the big dinosaurs but the clever, thinking buyer will go for something more ecologically sound which still looks different and has the performance to outperform other cars.

‘I see a trend to hybrids. You don’t normally drive a supercar flat-out for long, and short blasts suit the battery and motors. An electric car can be made to out-accelerate a petrol car, and we can calibrate it to feel like a petrol car complete with wheelspin.

‘You can’t use a modern supercar. It has got too big. We need to go to a cleverer solution which will appeal to the intelligent driver.’