We chart the evolution of the supercar breed over four decades. This time it's the turn of the nineties 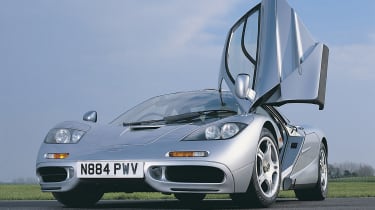 If the ’80s made us comfortable with the idea of the 200mph supercar, the ’90s was the decade that rolled it up into a little ball and batted it straight out of the park. There were a number of great supercars in what some were already beginning to call the last golden era of motoring: thundering supercharged V12 Astons, a particularly rich seam in the evolution of the Porsche 911 GT2 and GT3, a slew of sensational Ferraris including the underrated F50 and even a Japanese entry-level Ferrari rival in the never-quite-right shape of the Honda NS-X. But one car overshadowed them all and, for good measure, supercars from every other decade, too. The McLaren F1.

The idea that 200mph was quite fast enough and would probably only be improved on in small increments had already been dealt a shattering blow by the Jaguar XJ220, launched in 1992. Itself built as a definitive response to ’80s heroes the Ferrari F40 and Porsche 959, the beautiful but vast Jag immediately raised the bar to a barely believable 217mph (sans cats) with acceleration to match, hitting 60mph in 3.6sec and dipping under eight to the ton. For various reasons – not least its size and the fact it was powered by the engine from the Metro 6R4 rally car and not the promised V12 – it was a commercial fiasco, but surely its position as king of the supercar hill would be safe for a good long time while the rest of the world caught up. That’s if it even felt like trying.

But the XJ220’s reign lasted just one solitary year. In 1993, the F1 made its move. The brainchild of Formula 1 designer Gordon Murray and styled by Peter Stevens, the McLaren wasn’t just the fastest and most expensive supercar the world had ever seen, it was nothing less than mind blowing. Built around a carbon monocoque with a central driver’s seat forward of the two flanking passenger seats, it was powered by a naturally aspirated 6-litre V12 supplied by BMW developing 627bhp at 7400rpm and 480lb ft at 5600rpm. But it weighed just 1140kg and therefore had a power-to-weight ratio of 559bhp-per-ton, hitherto the preserve of the fastest superbikes.

It did to the XJ220’s performance stats what the Jag had done to those of the world’s previous fastest supercars. It destroyed them. It touched 240mph at the VW test track, it accelerated to 100mph in 6.3sec and, above 150mph, it was quicker than a Formula 1 car. It may have cost £635,000 when it was new but it became an instant legend and good examples now fetch twice that.

The ’90s may have been the decade Geri Halliwell left the Spice Girls, the first cloned sheep was christened Dolly and Pepsi briefly thought clear cola was a neat idea but, in the world of supercars, only one story really mattered.