For every Miura or Murciélago there’s another supercar that didn’t quite make the mark. Here are ten overambitious or underdeveloped exotics that are best avoided 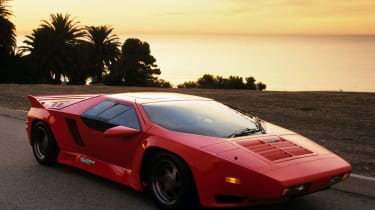 1 Vector The story of Gerry Wiegart’s Vector is swathed in lawsuits, but there can be little doubt that the cars – mid-engined wedges, mainly with Chevrolet power – are crap. Wiegart was a frustrated fighter pilot with more ambition than talent who saw his cars as the all-American answer to Italian exotica. He was courted by the American press for a while but others saw through the project, which always struggled for funding; Wiegart sued AutoWeek when it called him ‘Peter Pan’ and his Californian headquarters ‘Neverland’. The 1980 W2 Twin Turbo, with its claimed 500bhp and 200mph potential, was allegedly repainted several times to give the impression there was more than one in existence. Some kind of critical mass was reached with the W8, of which 17 were built.

2 Monteverdi HAI 450SSPeter Monteverdi’s front-engined GT cars were, and are, the coolest of the cool, but with the Hai the Swiss car dealer turned builder seemed to move out of his comfort zone. Mythical and beautiful, the original 450SS of 1969 (two built) promised 177mph from its 6.9-litre Chrysler Hemi, but the bulky V8 sat so far forward in the chassis it was virtually between the shoulders of the driver and passenger, and the handling was so unforgiving that even Monteverdi himself was reluctant to sell the cars to customers. A third Hai, the 1973 450GTS, had a longer wheelbase to help its composure, but only one was built.

3 Argyll Turbo GTProduced at Tayvallich in Scotland in the late ’70s, the Argyll revived a 1930s brand name in the form of a bizarrely proportioned mid-engined 2+2. It had a long wheelbase and supposedly rode and handled well, although few have ever reported from behind the wheel. Inside, the car was crude, with no attempt to hide the humble origins of its Marina door handles and Triumph Dolomite steering wheel. Performance depended on the engine. The prototypes had turbocharged Rover V8s, the production cars the engine and transaxle from the Renault 30, although a few were built with leftover Buick IndyCar V6s. All Argylls were constructed to order and buyers paid an alleged £25,000-£30,000, when a 911 cost £21,000…

4 De Tomaso MangustaBeautiful as its Ghia/Giugiaro body was, the Mangusta was a deeply flawed car. It was horribly cramped inside, the build quality was awful to the point of being dangerous at times, and the floppy chassis combined with too much of the Ford V8 engine’s bulk over the rear wheels produced a car with severe handling problems when its limits were approached. One American tester found that the Mangusta was capable of understeering and oversteering at the same time. What exactly was the point of a mid-engined car that didn’t handle well?

5 Panther SixRobert Jankel had always built cars for exhibitionists – Elton John and Oliver Reed were among his flamboyant ’70s clients – and this six-wheeled creation, inspired by the contemporary Tyrrell Formula 1 cars (or possibly Lady Penelope’s FAB 1) took that to another level. Powered by a mid-mounted twin-turbo 8.2-litre Cadillac V8, the Six promised 600bhp and 200mph, and while the £39,950 price tag made a Rolls-Royce Camargue look like a bargain, it did buy you every luxury, including twin telephones and an in-dash TV. Only two examples, including the 1977 Motorfair show car, were built.

6 Jimenez NoviaThe Jiminez packed nothing more exciting than a bike engine – well, four bike engines to be precise. Its 550bhp was generated by four banks of four cylinders arranged in a W pattern around a common crankshaft, all topped off with Yamaha FZR1000 superbike heads. That gave a capacity of 4 litres, and with five-valve cylinder heads it could supposedly manage 217mph, but as just one prototype was built we’ll probably never know for sure…

7 Lister StormLister came from a tradition of building race-winning Jaguar-based specials. Its glory days were the ’50s and ’60s, but in the ’80s the name became synonymous with leery XJ-S Jaguars. The £220,000 Storm of 1994 was an attempt by the company to build a car of its own design, but still using a few XJ-S parts, mainly the engine. Apparently styled by Darth Vader, this lumpy monster was a practical(ish) four-seater and featured a honeycomb aluminium and carbonfibre chassis. The flat floor and venturi tunnels in the sides made the Storm one of the first ‘ground effect’ road cars, and with 600bhp from a 7-litre twin-supercharged Jaguar V12, Lister claimed 200mph and 0-60 in 4sec. But would you want to be seen in it?

8 Spiess TC522If you’re a German company best known for making industrial-grade transformers – so nothing to do with cars, in other words – what do you do for an encore? Go into the supercar business it would seem. Or not in the case of Spiess, which unveiled a 500bhp twin-turbo 5.7-litre V8 hypercar in 1992. There was a carbonfibre bodyshell, a six-speed transmission and a true supercar-style cab-forward design, but Spiess suffered from the age-old problem that affects all young supercar builders: how do you get the punters to part with the readies? With the TC522 weighing in at a massive £362,000, it’s no surprise that the project died before it ever got going.

9 Mercedes CLK GTREven taking into account that the CLK GTR was a road-going homologation special (differing only slightly from the pure FIA GT Championship car it was based around) it was still a pretty unpleasant car. The cockpit was a cramped place to work, and although the GTR was fast, with 6.9 litres of AMG V12 giving 199mph, the recalcitrant sequential gearbox was reluctant to change up and too often the handling seemed poised on the point of snap oversteer, so it was hardly a relaxing drive. Although minimal efforts were made to civilise the car in an attempt to keep the price down, the £1.1m CLK GTR, of which 25 were built, was still listed by Guinness as the world’s most expensive production car.

10 Laraki FulguraThe next time you’re asked to name a Moroccan car, here’s your answer. Laraki first appeared at the 2002 Geneva motor show and unveiled a completely redesigned supercar each year until it finally gave up in 2005. With styling that was a blatant copy of the Ferrari 360, the Fulgura was intended to take on thoroughbreds like the Lamborghini Murciélago and packed a 680bhp Mercedes-sourced 6-litre V12 with four turbochargers, enough to give a claimed 219mph top speed. But at 500,000 euros there were no takers.