We chart the evolution of the supercar breed over four decades. Here we chart supercars from the eighties 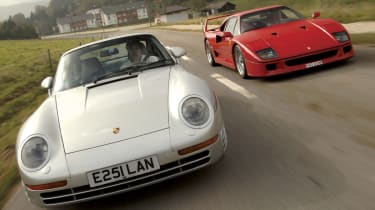 Money ruled the ’80s and the supercar brands made hay while Wall Street shone. As international trade opened up, so did new markets – particularly in America and the Middle East. This led to a shift in the image of the supercar driver: no longer was he a titled European playboy, now he was Gordon Gekko.

The cars changed to suit these new buyers. Still mostly mid-engined, vastly powerful and rear-wheel drive, but now with a different, more boulevard vibe. They lost focus, catering not to wannabe racers, but a more middle-aged clientele. Step forward the Ferrari Testarossa (right) and, once again, the Lambo Countach. Be-winged and be-slatted, they suited the big-hair-and-shoulder-pads generation to a tee. Miami Vice was the new creed.

But underneath the yuppie fluff, the 1984 Testarossa was a damn good car with a 4.9-litre 390bhp flat-12. The 180mph barrier was now being breeched with increasing regularity. Previously, aerodynamic advances had lagged well behind engine development, with many early supercars most notable for becoming highly unstable above 150mph (step forward, Miura), their claimed top speeds speculative at best.

The Countach, a decade old when the Testarossa arrived, soldiered on through the ’80s, becoming ever more ludicrous. The culmination was the 1988 25th anniversary model, with the 5.2-litre V12 now developing 425bhp for a 183mph maximum.

Ferrari became the dominant force in supercardom, largely because of Lamborghini’s parlous financial state (it had gone bust in 1978 and was in Swiss hands until Chrysler took over in 1987). But the Prancing Horse wasn’t without competition – a turning point had been reached and the result was a schism in the supercar world.

Almost as a reaction to the softness that had crept in, and mindful that racing can improve the breed, two new heroes emerged in the mid-80s. Forged by a new sense of purpose, they were champions of hardcore: the Ferrari F40 and Porsche 959. Hailed as the most technologically advanced supercar ever, the 4wd 959 finally arrived in 1987 and rewrote the acceleration rulebook. 0-60mph took 3.6sec, 100mph just 8.3sec and it knocked on the 200mph door, too.

But the F40 was the first to break through. It followed on from the 288 GTO which had been built to satisfy Group B racing regulations and used a slightly larger 2.9-litre twin-turbo V8. Its 478bhp trumped the 959’s 450bhp and the last car that Enzo commissioned was also the first to officially top 200mph.

The ’80s were too good to last and the year that brought us the 959 and F40 also gave us Black Wednesday, which put paid to the ambitions of other firms to join the supercar party. There had been tantalising glimpses of potential contenders throughout the decade: the Aston Martin Bulldog, the Vector W2, Ruf’s CTR, but they were intermittent and rarely amounted to anything; until in 1988 Jaguar showed us the shape of things to come: a 6.2-litre 500bhp V12 with 4wd named the XJ220. But that’s another story.