We chart the evolution of the supercar breed over four decades. Our final look focuses on the noughties 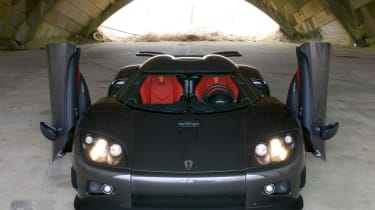 So the ’90s gave us by far the fastest car the world had ever seen (F1), comfortably the second fastest (XJ220) and a whole raft of tarmac-skimming missiles that could approach, do or exceed 200mph. It was the out-of-reach itch finally scratched, Chuck Yeager breaking the sound barrier, the supercar living up to its name. Ferrari consolidated its membership of the double-ton club into the next decade with its fastest-ever road car, the Enzo, though it faced tough competition from the Porsche Carrera GT and new kid on the supercar block, the Pagani Zonda C12S. Interestingly, the carbon-bodied Zonda claimed to be the McLaren’s spiritual successor and, in design philosophy, the parallels were clear.

But the F1’s influence on the cars that would follow it turned out to be more far-reaching than that. It acted as a catalyst, igniting a let’s-shoot-for-the-moon initiative bold enough to fill the vacuum left by NASA. The F1, prematurely hailed as a once-in-a-lifetime phenomenon in the previous decade, was merely the starting point in this one.

It set projects rolling in two directions. One, to exceed the F1’s phenomenal top speed and general accelerative prowess, however much power and technology it took. And two, perhaps more realistically, to apply the lightness and efficiency principles at the core of the McLaren in pursuit of speed without excess. The former approach found its ultimate expression in the Bugatti Veyron, the £1m, 16-cylinder, quad-turbo, four-wheel-drive, 1000bhp hypercar that effectively did to the McLaren what the McLaren had done to the XJ220 by smashing its top speed and acceleration records out of sight and, once and for all, drawing that line in the sand for ultimate supercar performance.

Except that, as we head towards the end of the new millennium’s first decade, the Bugatti, far from being regarded as the absolute summit of supercar endeavour, has become just another target to shoot at. The 9ff GT9-R, Ultimate Aero SSC and Koenigsegg CCXR all claim to best the Veyron’s 252mph top speed and, beyond a certain speed, once the Veyron’s off-the-line all-wheel-drive advantage has ebbed away, accelerate harder, too.

At the same time, ultra-lightweight minimalism is forging new extremes for what is almost certain to become the enforced supercar playground of the future: the track. Step forward the Caparo T1 and Ariel Atom 500. One thousand horsepower-per-ton is the new 200mph.

The first black president of the United States, a programme to fly men back to the moon, an iPhone that can send picture texts, and 0-100mph in 5sec. Things could be worse.