Ford Kuga now with five-cylinder powerplant from Focus ST. Worth a look? 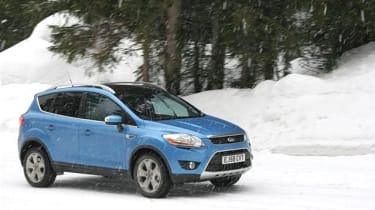 The Ford Kuga. Not very evo, is it? But what if we told you that it now featured the 2.5-litre five cylinder from the Focus ST? And that we weren’t pulling you leg, either. Keener to find out more? I hope so, because I’m going to keep writing for a little while yet.

Up until now the Kuga has been an entirely unobjectionable SUV: not as spacious and versatile as a Nissan X-Trail, nor as desirable and capable off-road as a Freelander, but dynamically talented and reasonably handsome as far as these things go. Got a perky 140bhp diesel, too – just as well given that’s what the vast majority of buyers want.

Only the completely shameless buy petrol SUVs these days and they tend to be Turbo Cayennes and supercharged Range Rover’s, so a 200bhp Ford Kuga isn’t likely to sell in great numbers – but if you’re sure you want a petrol Kuga, this is your only option. And it’s a good one.

OK, so the five pot has been detuned from 222bhp to 200bhp, but we’ve been informed that the two engines are mechanically identical, so if a 0-60mph time of 8.2 seconds isn’t quite brisk enough for you, the Mountune kit as fitted to our long term Focus ST may well be a retro-fit option.

To be honest, 200bhp is testing enough in a lofty, softly-sprung, long-travel SUV. The Kuga drives with a decent amount of panache: it rides smoothly, handles with reasonable verve and doesn’t get unduly led astray by random mid-corner bumps. There is a nibble if understeer if you go in a bit hot (and lots of flashing lights on the dash if you go in a lot hot – the stability system can’t be switched off), but the Kuga is capable and for an SUV, pretty informative.

It’s a shame the engine isn’t as entertainingly warbly here as in the hot hatch, but it piles on pace willingly enough once above 2,000rpm and is both smooth and well mannered, while you can choose either a slick six-speed manual or a five speed auto. In short it’s another polished Ford product – not desperately exciting but moderately satisfying. 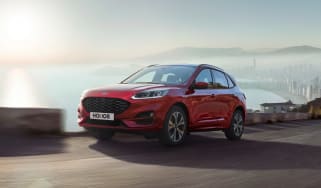 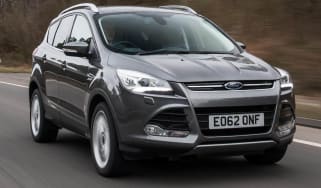 The new Ford Kuga SUV is larger than the car it replaces. Can it be as fun to drive?
Visit/ford/kuga/6604/ford-kuga 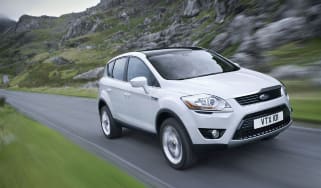