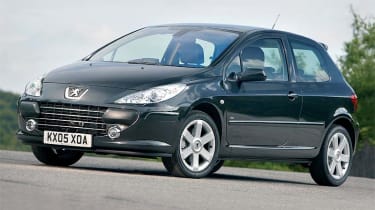 Remember the Peugeot hot hatch? If your memory stretches back that far, chances are your recollections are likely to be taking on a sepia tint. The current trend towards the mega-hatch seems to have completely passed the French company by, disappointing 206 GTI 180 notwithstanding. Yet there's still plenty of enthusiasm beneath the corporate surface. Senior engineers talk fondly of cars like the 205 GTI and 306 Rallye - we're promised that there will be a 'genuine performance derivative' of the forthcoming 207 supermini. And in the meantime there's even a modestly piquant version of the 307 to try to keep the faith alive. The opportunity has come with the 307's mid-term facelift - most of which seems to be a Photofit graft of the 407's front end, but which also includes a redesigned dashboard - with a broadened engine range for the hatch. The 180bhp 2-litre previously found only in the 307 CC is available in three- and five-door guises for the first time. Badged, inexplicably, as 'Feline', it's pitched as the range-topper, combining a strong goodie count, including leather as standard, with the new engine and a slightly sportified chassis. Dynamically it's not bad. Chassis settings are based on those of the already warm-ish 2.0 XSI, meaning 17in alloys, reasonable grip and - with stability control caged - even a modest measure of the sort of throttle adjustability that defined earlier generations of hot Pugs. Not that the uncommunicative steering exactly encourages you to go play. Low-speed ride quality is surprisingly leaden footed, and the driving position is still strangely offset, but the 307 is a decent, rapid cruiser with good motorway refinement. The weak link remains, sadly, the performance. As with the 206 GTI 180, the Feline doesn't feel anything like as brawny as the claimed pony-count; the 136bhp 2-litre HDI turbodiesel is cheaper and real-world quicker, and combines a punchy mid-range with predictably brilliant economy. There's not much for people like us in the facelifted 307 range - which is a pity, considering Peugeot's proud history of building accessible performance icons. Let's just hope that cars like the forthcoming 407 coupe and 207 GTI can get a bit closer to how things used to be.