Not a sports car as such, but it's not without merit 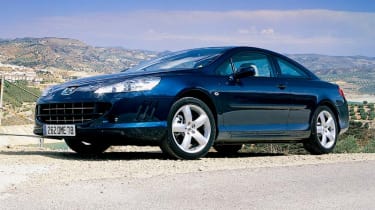 This feels good. I'm blazing up a long, straight hill in southern Spain, and the V6 engine is lapping it up. Overtake? Why not? Squeeze the accelerator and away we go, swishing serenely along to that V6 hum, no wind noise to speak of, not much road noise either. Life is pleasant in the Peugeot 407 Coupe.

As pleasant as it would be if this car had a German badge? That depends on whether your self-image is defined by brand. Don't forget that Peugeot was selling upmarket coupes, designed by Pininfarina, long before the affluent class felt it had to drive German to gain road-cred. Think of it as a kind of old-money coupe, not that many will.

Inside, the 407 Coupe is as sumptuous, as deep in quality and as tactile in texture as anything German. The top GT version even has perfectly-stitched leather coverings for its clean-cut, handsome dashboard. All feels solid, all feels proper, including proper aluminium trim on doors and dash. The Coupes are made on a separate, slow-moving line at the factory in Rennes and they are meant to be much more special than the mainstream 407 saloons and SWs.

With which the Coupe has less in common than you'd think. The body is around two inches wider, as are the tracks, and no external panels are shared. The broader body adds considerable weight - top models break the 1700kg barrier - but is also extremely stiff, aiding refinement.

With past Peugeot coupes being designed by Pininfarina, including the gorgeous 406, you'd think the Italian maestro would have done it again. Indeed it tried, but this time Peugeot went for an in-house design. It's striking, certainly, but not beautiful; however the obligatory Ferrari references make their appearance in the form of three angled (and non-functional) vents just ahead of the front wheels and flanking that massive mouth. Very 275 GTB. They break up that expanse of overhang, too.

Our V6 is a six-speed Tiptronic automatic, and the ready availability of 330lb ft of torque means you might as well let the autobox do its work. Twin turbos help the thrust overcome the weight, and thanks to the low noise levels it's easy to drive far faster than you thought you were driving. Besides, the engine fades after about 4500rpm. Didn't I mention it's a diesel?

That rev-ceiling and, from the outside, a metallic-sounding idle really are your only clues. The particle filter means you don't even get any smoke. This joint-venture PSA-Ford diesel is the same one that Jaguar uses, and the 407 Coupe shares the active engine-mount idea that makes the XJ6 TDVi so astonishingly quiet. You can hear that it's a V6, but a diesel? No, neither from inside nor out.

All of which is embarrassing for the petrol V6, which really needs more power. As it is, you need to work it hard and it's curiously unsatisfying. The mushy initial throttle response is the problem, making smooth, flowing gearshifts a random act.

That said, there's hope for the manual V6. It's a little less nose-heavy, so keener to change direction, and the extra control of engine torque with a manual lets you adjust the cornering balance more accurately. You can feel some passive rear-steer as you turn, while the front wheels grip hard and resist understeer. The steering is short on true feel, as you'd expect, but it's accurate and quick.

These V6 Coupes also have active dampers, fidgety in 'sport' mode but serene and well-controlled in 'normal' mode with its nine instantly-altering stiffnesses. While major ridges catch the suspension out, otherwise it's as impressive as that of the first 407 saloons was tiresomely turbulent. Both hardware and software have evolved since then.

There's also a 2.2-litre, 163bhp Coupe, but clearly the 2.7 HDi diesel is the engine of choice. Badge snobbery will be a snag, though: 'The problem is going to be getting people to try one,' says UK marketing manager Andy Sutton. He's so right.