New Ibiza is the most refined, grown-up supermini yet, but still not the most fun 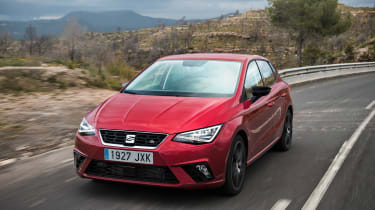 Now in its fifth generation, the SEAT Ibiza’s central tenets remain as strong as they ever have: Sporty, youthful styling, eager driving characteristics, and strong value for money.

We’ll have to wait a short time for a Cupra variant, but in the meantime the new Ibiza is still a promising prospect. It’s the first car to sit on the VW Group’s new small car platform, its styling is sharper than ever, and its cabin could be the best in the class. But is it as fun as it looks?

A trio of 1-litre, three-cylinder petrol engines will be available initially, starting with a non-turbocharged 1.0 MPI with 74bhp and rising to more interesting 94 and 113bhp turbocharged 1.0 TSIs. The latter of these has enough gusto to slide past 62mph in 9.3sec, while its 148lb ft maximum torque figure comes on strong at 2000rpm and lasts until 3500rpm. 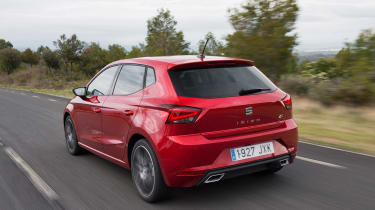 Manual and DSG transmissions are available. We tried the manual with both engines, and it’s the usual VW Group fare: A light action, slightly notchy as each ratio engages, and not particularly tactile. The gearing feels well-matched to both engines though; second is a good B-road gear in the 1-litre, while tall upper ratios benefit refinement and economy at higher speeds.

SEAT sometimes seems like the poor relation in the VW Group, stuck behind its parent company and even Skoda when it comes to new platforms and engines. But the new Ibiza is actually the first car in the group to use the new MQB A0 platform - not least because SEAT led its development. In time it will underpin the next-gen Polo and Fabia, but before then two other models, the Arona compact crossover and Audi’s next A1, will be built alongside the Ibiza in Barcelona. 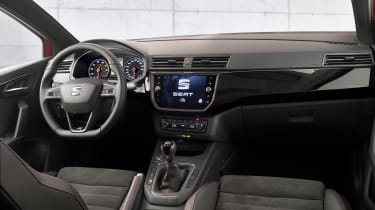 The Ibiza has grown over its predecessor, now a significant 87mm wider than before. But it’s actually 2mm shorter, 1mm lower and has a 60mm longer wheelbase. The result is a car that looks more like a mini-Leon than an Ibiza, and makes the old five-door Ibiza look positively frumpy. The SC too, though that’s just as well as SEAT won’t be selling a three-door model from now on; nor will it supply an estate version; there just isn’t the demand in this segment.

Chassis rigidity is up 30 per cent thanks to the new platform, while weight is low: the entry-level 1.0 MPI comes in at 1091kg at the kerb.

We’ve come to expect superminis to feel more grown-up, and in many ways the Ibiza is now the most grown-up of the bunch. Even before you’ve got in it looks like the larger Leon, and that sensation largely remains after you’ve climbed inside and driven a few miles. Larger individuals might notice the door cards and centre console in slightly closer proximity than they would be in a car from the class above, but in terms of refinement, quality, and infotainment options, you aren’t losing much at all.

This maturity might imply dull driving dynamics. Actually, the new Ibiza’s not too bad here either, though thrill-seekers will want to hold tight for the inevitable Cupra model, as the FR 1-litre isn’t quite quick or incisive enough to truly entertain. The 1.0-litre unit is enthusiastic enough, but chassis and tyre technology in this class has developed such that it’s undramatic, whether the going is straight or twisty. 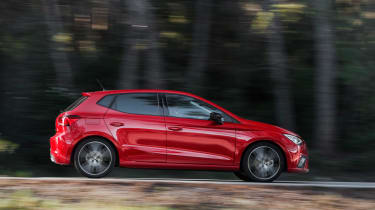 Both steer well, with a slight nod in favour of the 1-litre car which carries a little less weight over the front wheels. Feedback from the front axle isn’t forthcoming, but the rack is accurate and well-weighted and there are good levels of grip to lean on. Selecting Sport from the SEAT Drive Profile settings has little discernable difference to any dynamic trait other than the steering, which is slightly more resistive to inputs. In theory, throttle response also improves, and DSG models (we drove manual cars) feature different shift points.

> For an in-depth review of the SEAT Ibiza, check out our sister site Carbuyer

The Sports suspension doesn’t provide hot hatch levels of body control but there’s enough dynamism here to make light work of quick changes of direction, and there’s a sense - not always present in Volkswagen Group small cars - that the rear axle is assisting in those direction changes. Ride quality is good; Spanish roads are too smooth to really test the Ibiza’s pliancy, but the chassis doesn’t protest too much over the odd scabby surface or speed bump. 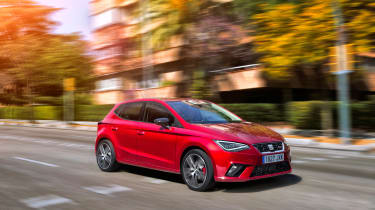 The Ibiza sits in a rather competitive sector, with the new Ford Fiesta, Citroen C3 and Mazda 2 all competing with the model - the Mazda’s a little more fun to drive, if not so overtly sporting. SEAT also lists the Peugeot 208, Renault Clio, Skoda Fabia, Toyota Yaris, Vauxhall Corsa and aforementioned Polo as being close rivals. 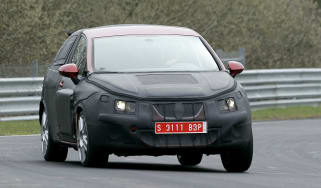