The Volkswagen CC loses its Passat tag and V6 petrol engines, but gains a new look and lots of tech 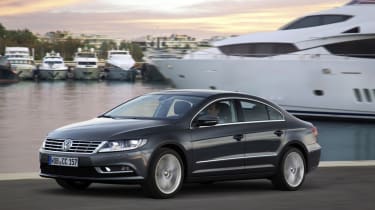 It used to be called the Passat CC, now it’s just called the CC. This is Volkswagen's four-door coupe rather in the mould of the Mercedes CLS.

The original Passat CC was a surprising car, with a suppleness to its chassis that was genuinely entertaining and enjoyable. The new CC has lost a little of that adjustability, but it’s still very capable down a twisty road, with accurate steering and impressive composure for such a big car. After spending eight hours and a huge number of motorway miles in it we can also report that it is a remarkably refined and relaxing place to be.

Perhaps the most impressive technical highlight is actually an option that you can spec; High Beam Assist. On a long motorway drive back from watching the Monte Carlo Rally, the automatic headlight dimming was utterly brilliant (and usually we can’t stand such systems). It actually tracks the other cars and only blacks out the patches that they are in, keeping the rest of the road lit with high-beam. It’s incredible to watch and it clearly works as we never once got flashed in three hours of driving.

Adaptive Chassis Control is included as standard on the GT-spec 2.0-litre petrol and its three suspension settings (Comfort, Normal and Sport) do make a very appreciable difference to the way the CC rides and handles. Impressively the damping was excellently controlled, even in Sport on bumpy French sideroads.

We will no longer be getting the V6 petrol engines, which is a shame because as good as the 207bhp TSI engine is, it doesn’t animate the CC like the V6 used to. Instead this four-cylinder version allows for a 0-60 time that comes out at 7.6 seconds, and 150mph when flat out.

Even the most expensive CC is over £15,000 cheaper than the cheapest Mercedes CLS, but perhaps a fairer comparison is to look at what you would pay for a similar 2.0-litre 207bhp Passat. The answer is £24,490, or just under £4000 less. The CC does look a lot better though.

The sat-nav really needs to be better as the map is fairly unpleasant to look at and use, however, you can spec the Easy Open system for the boot, which allows you to sort of kick the underneath of the rear bumper and open the boot if you’ve got your hands full.